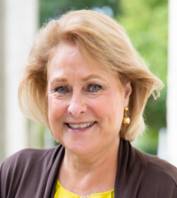 Management Consultant, Meg Worthington is an invaluable asset in dealings with diverse and unique real estate transactions.  Meg recently received her GAi, Broker Salesperson designation in real estate and has been a licensed salesperson since 1980.

Prior to joining the Stephen N. Frankel team in 2001, Meg served as President of the Worthington Group for 16 years, a family owned management-consulting firm.  Along with her Father, Charles, now deceased, they represented many corporations and publicly traded companies in the areas of marketing, strategic planning, legislative and issue development.

Meg's long-time service on the Galloway Township Council has led her to being named to the New Jersey Elected Officials Hall of Fame.  Throughout her 24-year tenure on council, Galloway has been one of the fastest growing communities in New Jersey and she has been involved in all facets of that growth and development.  Meg has served four terms as mayor and has also served on the Planning Board, Budget, Infrastructure, Solid Waste, Affordable Housing and many ad hoc issue committees; giving her insight into virtually all aspects of Galloway's administration, operation and development.

She has aIso been involved in the state regulatory process on several levels and understands the complex approval and redevelopment process in New Jersey's Coastal and Pineland areas.