The Chief: The Life and Power of Chief Justice John Roberts

A Livestream will be available in Atlantic City 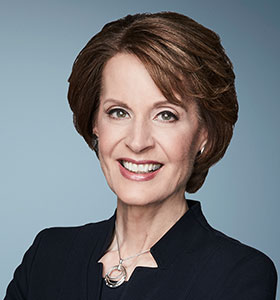 Joan Biskupic is a full-time CNN legal analyst and author of a new biography, The Chief: The Life and Turbulent Times of Chief Justice John Roberts (2019).

Before joining CNN in 2017, she was an editor-in-charge for Legal Affairs at Reuters and, previously, the Supreme Court correspondent for the Washington Post and for USA Today.

Ms. Biskupic was a finalist for the Pulitzer Prize in explanatory journalism in 2015 for “Echo Chamber,” a Reuters Special Report on the influence of elite appellate lawyers on the Supreme Court. In addition to her new biography of Chief Justice Roberts, she is the author of highly-praised books on Sandra Day O’Connor, Antonin Scalia, and Sonia Sotomayor. Biskupic served as a visiting professor for the 2016-17 academic year at the University of California, Irvine.

A native of Chicago, Ms. Biskupic holds a law degree from Georgetown University.

Sponsored by the Political Engagement Project/American Democracy Project, the William J. Hughes Center for Public Policy, the Office of Service-Learning and the Office of the Provost.