Museum Tour an Emotional Visit to the Past

Some watched in awe. Others stared and listened. Some wept.

Fifty participants on a Stockton University trip traveled a few hours up the Parkway on July 23 then journeyed back some 75 years. What they saw and heard was the most comprehensive exhibit dedicated to the history of Auschwitz and its role in the Holocaust ever presented in North America, according to the Museum of Jewish Heritage - A Living Memorial to the Holocaust, in New York City, where it is on display. 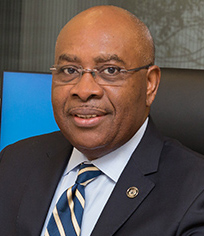 Stockton University’s new School of Business DeanAlphonso Ogbuehi has only been at Stockton for a few weeks, but he’s already full of energy and ideas to expand the profile of the program, especially at the new Atlantic City Academic Center.

The new dean, who started in July, said he was excited about coming to Stockton from the moment he met President Harvey Kesselman and the staff.

‘100 Faces of War’ Shares Stories of Those Who Served 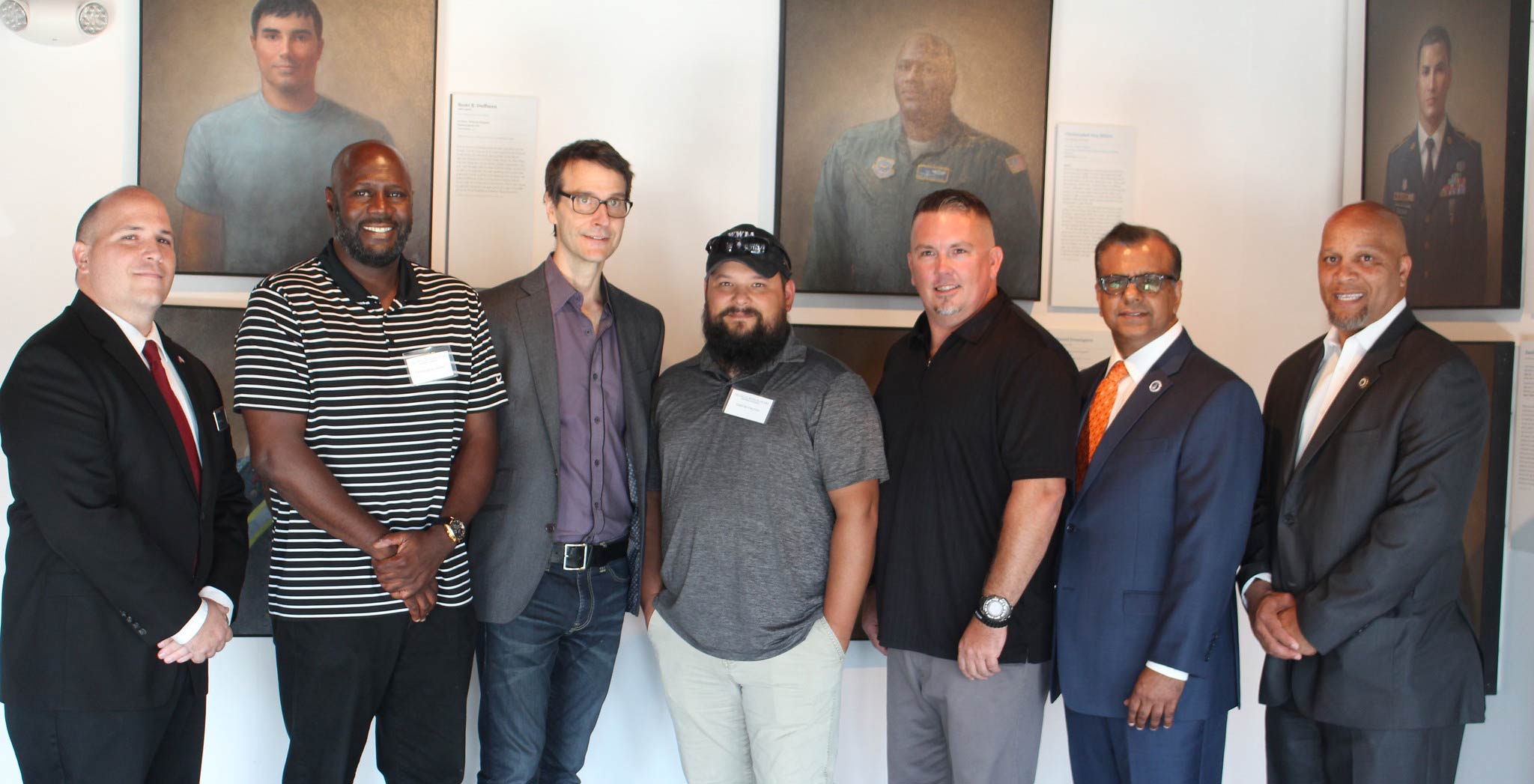 Discussions of war typically focus on the politics, referring to the men and women who serve in generic terms of troops and military.

Boston, Massachusetts artist Matt Mitchell wanted to focus on the people themselves, their stories and the lessons they had to share. Over a period of nine years he painted the portraits of 100 members of the U.S. Military who served in Iraq and Afghanistan.

The Press of Atlantic City featured the exhibit.

“Summer Cinema in the City” is featuring Avengers: Endgame at 6 p.m. on Tuesday, Aug. 6, in the Stockton University Atlantic City residential classrooms B119/120. Attendees are asked to bring their Stockton IDs.

Zappile Swims to Second Place in Around the Island Marathon 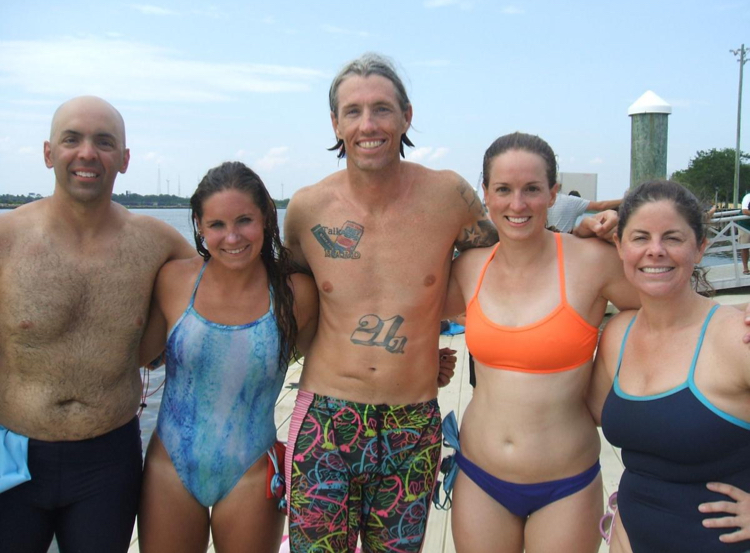 Tina Zappile, associate professor of Political Science at Stockton, submersed herself in quite the challenge recently. On July 14, she swam in the Jim Whelan Open Water Festival, specifically the 54th Around the Island Marathon, for the first time. This festival is an international event that hosts athletes from around the world.

Zappile was on a five-person relay team for the 22.75-mile race that started at the Atlantic City Boat House, swam south to the tip of Longport, circled north on the oceanfront toward Brigantine, cut east through the inlet, and came back down through the back bay to end at the Boat House.

“We each swam four times in rotation, and two of my swims were the Longport/Ocean City inlet and the second half of the Atlantic City/Brigantine inlet and bridge. I also swam in front of our Atlantic City campus,” said Zappile. “It was a beautiful day to spend almost 10 hours on the water. My team came in second place for relays with a time of 9:43:07.”

Zappile is an avid swimmer and a member of the Ocean City Swim Club and South Jersey Aquatic Club (SJAC) Masters teams, where she practices year-round in the pool and ocean.
She has participated in many swims along the Jersey Shore, including the Ocean City Masters Mile, Atlantic City Pageant Swim, Captain Turner swim in Longport, and Harry Yates Memorial Swim in Atlantic City. 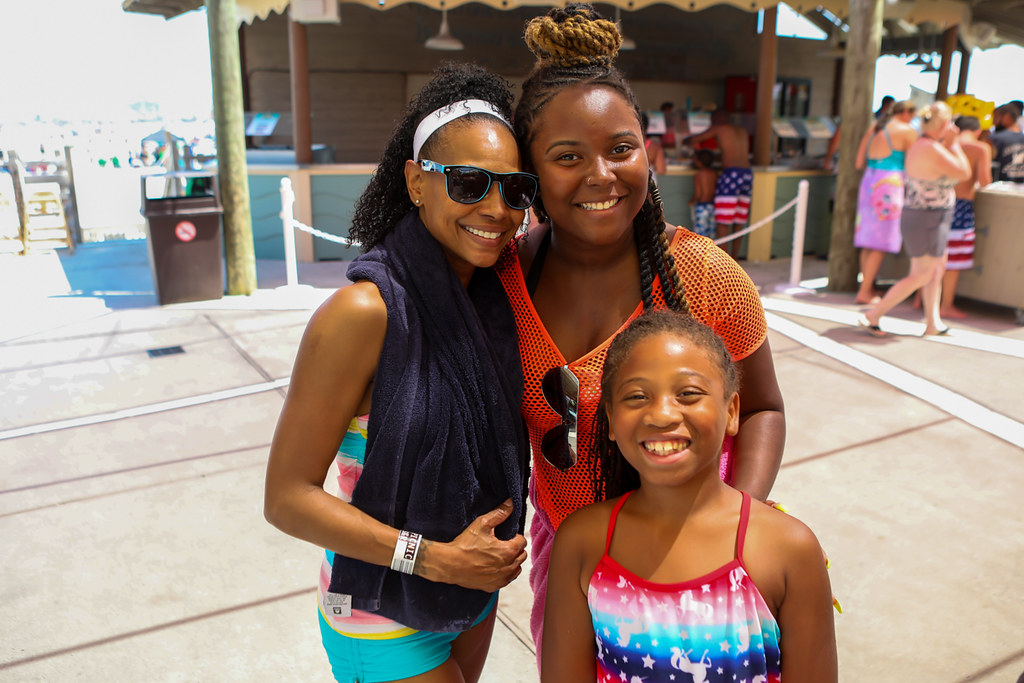 Every summer, Stockton University hosts a series of fun-filled events for alumni and friends to reconnect with the university and each other, and every year they keep getting bigger – yet none have been quite as big as the inaugural "Stockton Day" at Morey’s Piers in Wildwood, N.J.

Twitter:Jamie Oriente of Port Republic is returning to #StocktonU to finish her degree thanks to a $25,000 scholarship from her employer, #chickfila. A crew filmed her on the Galloway campus this week for a video highlighting #remarkablefutures the company is helping create. Go Jamie!

Facebook: #StocktonTBT: The Press of Atlantic City dug deep into the archives to show Stockton through the years. Check out the slideshow.

The Stockton University women's lacrosse team and seven of its student-athletes qualified for academic recognition from the Intercollegiate Women's Lacrosse Coaches Association (IWLCA). The Ospreys earned acknowledgement as an IWLCA Zag Sports Academic Honor Squadby registering a team grade point average of 3.0 or higher for the 2018-19 academic year.

Ana Rodriguez joined Stockton University as the director for Student Transition Programs, effective July 8. Rodriguez, a Camden native and EOF alumna, brings nearly a decade of experience developing student success programs that serve the needs of first-year, transfer, upper-class, first-generation and adult students as an administrator and instructor. Previously, she served in capacities including assistant director of Trio Student Support Services at Rutgers-Camden and assistant director for EOF and adjunct faculty at Saint Peter’s University. Most recently, she served as chief of staff at LEAP Academy in Camden, where she provided leadership for the operations and professional development of the nearly 200 educators who served students at LEAP Academy University Charter School.

In her new role at Stockton, Rodriguez will promote inclusive student success and retention from orientation to graduation by providing integrated, intentional programs for first-year, transfer, sophomore, junior, senior and adult students. Her mission is to support the University’s strategic priorities of increasing degree completion and closing equity gaps in academic achievement and degree attainment.

Beachgoers, Be On the Lookout

Heading to the beach this weekend? Keep an eye out for Stockton’s banner plane!

The banner will be flying this Sunday from Cape May to Surf City.

Catch a Lecture by a Colleague

All lectures are free, open to the public, and held 7 p.m. on Fridays as part of the Sabbath services.

Now-Sunday, Oct. 6: "100 Faces of War," a traveling exhibition from the Smithsonian