On May 7, for the first time in University history, the Ospreys won eight events and used their depth to post a team score of 236 to finish 17.5 points ahead of second-place Rowan University, who was the two-time defending NJAC champion. 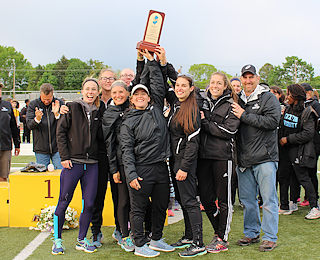 The Stockton men’s basketball team won four games during a five-day span of March 1-5 to win the program’s first Eastern College Athletic Conference (ECAC) championship. With the four-game run to the title, the Ospreys finished 18-11 under Interim Head Coach Scott Bittner, who took over after the retirement of Gerry Matthews last summer. 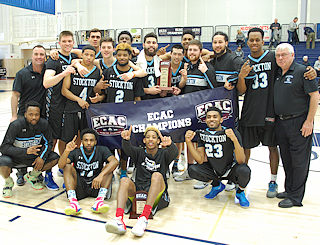 The Ospreys rallied from a 14-point deficit to defeat Penn State Behrend 74-72 in the ECAC championship game and capture the title of the 12-team tournament. Earlier in the week, the team topped Baruch College 79-74 in the first round, Carnegie Mellon 84-74 in the quarterfinals and then Bethany College 83-63 in the semifinals.

Sophomore Kashaun Barnes was named Most Valuable Player of the ECAC Tournament. Barnes scored a career-high 25 points in the championship game and averaged 16.8 points and 7.0 rebounds during the four-game run. Junior Marcus Harmon joined Barnes on the All-Tournament Team after averaging 14.5 points and 5.5 rebounds in the tourney.

The ECAC Tournament is an annual postseason event that features teams from throughout the Northeast. The 2017 field included NCAA Division III squads from Massachusetts, New Jersey, New York, Pennsylvania and West Virginia. 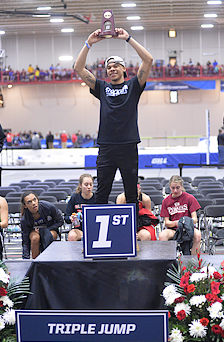 Lewis made his fifth appearance at an NCAA Championship meet (three indoor, two outdoor). With the win, he qualified for his sixth career All-American honor, tying the school record shared by Klemic (2005-06), Lisa Shepherd (2007-10 long jump) and Chelsea Vaughan (2014-16 pole vault). Prior to breaking through for his first NCAA title, Lewis previously finished third in the triple jump and eighth in the long jump at the 2016 NCAA indoor meet. He was the NCAA outdoor runner-up in the triple jump this year and last season. He also was eighth in the long jump last season plus eighth in the outdoor triple jump as a freshman in 2015. All-American status goes to the top eight finishers in an event at the NCAA Championships. 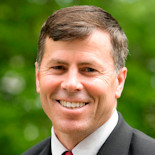 McHugh brings over three decades of experience, with earlier positions at Yale University, Bowling Green State University and The College of New Jersey.

McHugh graduated from Columbia University with a B.A. in Latin American studies in 1978. While there, he wrestled varsity all four years and twice was team captain, earning All-Ivy honors. McHugh holds a M.S. in Sport Management from the University of Massachusetts, where he was an assistant wrestling coach and junior varsity football coach. He chaired the NCAA Division I
Wrestling Committee, and the National Wrestling Coaches Association inducted him into the Division III Wrestling Hall of Fame for his contributions to the sport.