The transfer was announced at the Feb. 21 Stockton University Board of Trustees meeting. 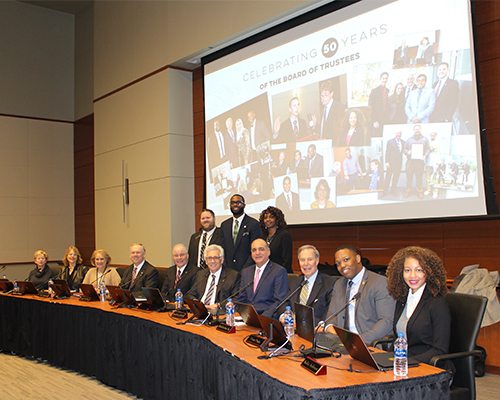 Special consideration will be given to supporting student and faculty research, engagement with the local K-12 STEM programs and collaborative projects with the Aquarium.

“We want to continue having a connection with the waterfront and the Aquarium,” said Peter Straub, a member of the ACHWF Board and Dean of the School of Natural Sciences and Math at Stockton. “We also want to expand our science presence in the city in connection with our new Atlantic City campus.”

Straub said Stockton has had a long-term internship program with the Aquarium and operated programs like the Sea Perch underwater robotics program there.

The fund’s remaining assets are about $125,000. Additional contributions will be accepted to help expand programs.

Chartered in 1976 under the leadership of the late James Cooper, the ACHWF had a lease-management agreement with Atlantic City to develop and manage the Historic Gardner’s Basin tract. Its purpose was to also preserve the waterfront section, display sea-life and seafaring technology, conduct marine education programs for schools and community children, and to preserve the area's maritime history.

In 2018 the ACHWF was dissolved and the board decided to direct the remainder of their endowment to the Stockton University Foundation.

ACHWF President Chris Seher credited Jimmy Cooper and Murray Raphel for their foresight in creating the foundation and said he was pleased Stockton would continue their work.

“We could not think of a better group to steward the fund,” Seher said.

In other business, the trustees authorized the President to negotiate the purchase of the Chris Gaupp Residence Facility at 421 Chris Gaupp Drive from D&M Galloway Holding, LLC. A Letter of Intent has been executed and the final terms of the sale will be released in a final purchase agreement following due diligence and successful negotiations.

To meet student housing demand, Stockton has leased the Chris Gaupp facility for student housing since fall 2016. Prior to that, students had been housed in nearby motels on the White Horse Pike.
The 24,099-square-foot building sits on 2.7 acres and has 42 rooms (doubles and triples), common areas and retail space. It is just under a mile from the main campus entrance on Jimmie Leeds Road. Some 90 students live there.

The board also approved housing rates for 2019-2020 with an average three percent increase, though rates vary by location. Rents will range from $3,088 to $5,808 per semester depending on the location and makeup of the units. Housing in Atlantic City will range from $4,830 to $5,778 per semester. The 12-month housing option will again be offered at a cost of an additional $600 for the winter break and $1,820 for the summer. A daily Stockton student rate of $25, a non-Stockton student rate of $35, and a faculty rate of $50 for winter and summer will also be offered.

The board also approved the academic calendar for 2019-2020, an honorary Doctor of Public Service degree to Commencement speaker Congressman Jeff Van Drew, and the expansion of Stockton’s dual credit program in Holocaust and Genocide Studies to high schools in Philadelphia, Montgomery, Delaware and Bucks Counties in Pennsylvania. Tyler J. Rodriguez was appointed to serve as a student director and board member on the National Aviation and Research Technology Park in Egg Harbor Township.

Kat Wentzell and Ray Dudo gave a presentation on the Stockton 50th Anniversary web site “Stockton Stories.”  The board recognized the 50th anniversary of the founding of the board of trustees in 1969. Stockton opened in 1971. Former trustee Ellen Bailey and former student trustees Steven Radwanski, and Ike Ejikeme attended the meeting.