Atlantic City, N.J. - A prominent former New York attorney and philanthropist who grew up in Atlantic City has started a program at Stockton University that will pay all college costs for a select group of students with connections to his hometown.

The goal of ELSP is to encourage  students to remain in Atlantic City and become its next community leaders after they graduate.

“The Stockton Atlantic City campus creates an opportunity for local students who might otherwise forego a higher education to obtain a university degree while remaining in the community,” Engelberg said. “This makes it possible to identify talented young men and women with the potential to be the next generation of business, civic and communal leaders in Atlantic City, and provide them with an enriched set of educational, experiential and mentoring experiences to turn that potential into a reality.”

ELSP will cover the full cost of tuition, fees, room, board, books and other expenses. It will also provide leadership and experiential activities and internships to help the students develop their leadership potential.

“This is a phenomenal leadership development program for our students,” Stockton President Harvey Kesselman said. “(Engelberg) wants to give back and he understands what his philanthropy means.” 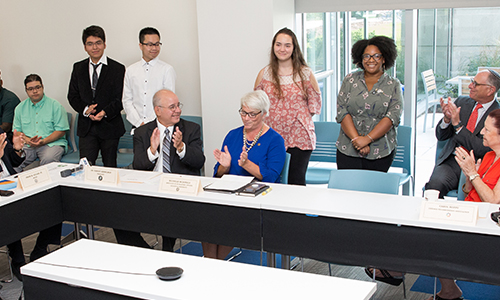 The students said Engelberg’s gift is an inspiration to them to do well and help others.

Gonzalez wants to be a high school teacher in Atlantic City because she recognizes the impact a teacher can have on a student’s life. She said her parents had promised she would attend college, and the award will help relieve financial pressure.

“I care about Atlantic City because I have lived here all my life,” she said. “Atlantic City is a beautiful melting pot of people, all with their own unique cultures and perspectives. I have watched this combined group of people suffer tragic loss but always recover and bounce back as a community.”

Pham’s family emigrated from Vietnam to Atlantic City. Pham said his parents worked hard so he and his sister could have better lives.

“Through their perseverance, we now have a place to call home,” he said. “Atlantic City is their home, and now so it is also mine.”

Pham plans to go into law enforcement, and would like to explore opportunities in the federal system, such as the FBI.

Rubio said he was at a job orientation when he got the call that he had been named an ELSP scholar. He was working two jobs to help pay for college, one in a casino, and the other tutoring, and while he liked the casino job, he said the scholarship made it possible for him to leave at the end of the summer and focus on his academics.

“My parents are so proud,” he said. “This opens up so many opportunities because it is not just a scholarship. Before I had to worry about jobs and paying for college. Now I can do more in college and in the community.”

Taylor said her parents started planning for her to attend college the day she was born, and the program will provide tremendous financial help.

“I’m a first generation college student and my parents were so proud of me for getting into Stockton,” she said. “I was born and raised (in Atlantic City) by my parents, who work hard to try to give me a better life and opportunity than they had. I hope to be able to help my community one day, to pay back what has been done for me.”

Engelberg’s parents were Jewish refugees who left Germany in 1938 and eventually settled in Atlantic City. He credits his childhood in Atlantic City, including jobs he had on the Boardwalk, and the experience of growing up in a multicultural city, for providing him with the tools for a successful life.

Engelberg graduated from Atlantic City High School in 1956 and an Avoda Scholarship allowed him to attend college. The award left a lasting impression on him about the impact of philanthropy on a young person’s life. Engelberg went on to graduate from NYU Law School and became a nationally recognized intellectual property lawyer in New York. His support established the Engelberg Center on Innovation Law and Policy at NYU law school.

Engelberg said the new Stockton campus in Atlantic City was the impetus for his gift to the university and its students.

“I had thought about doing something in Atlantic City as a way to pay back for the life I enjoyed here, but there was no university here,” he said. “When Stockton opened, I said ‘Here’s the opportunity.’ There is great potential synergy between Stockton and Atlantic City and I hope to take advantage of that.”

The agreement, which will operate through the Stockton Foundation, calls for a five-year competitive program that will choose up to four scholars each year from the Stockton freshman class, with a strong preference for students from Atlantic City or from neighboring sending districts to Atlantic City High School.

Participating students will take a special curriculum that includes three entrepreneurship classes and at least two classes that focus on civic engagement and social change.

The ELSP will cover tuition, fees, room, board, books and any other expenses.

Stockton Chief Academic Officer for Atlantic City Michelle McDonald told A.C. Executive Council members, which includes city, civic and business leaders, that she hoped they would get involved in the program.

“This not just a program you can watch,” she said. “This is a program in which you can participate.”

Dr. Maralyn Mason will serve as the program’s director at Stockton, and, Rabbi David Weis of Beth Israel Synagogue in Northfield, a longtime friend of the Engelberg family, is the family’s representative.

“I’m very excited to be a part of this program, and look forward to watching it develop” Weis said.

Engelberg said his 80th birthday is this month, and for him, there is no better way to celebrate that milestone than by giving a gift that will benefit students and a city he loves.

“The program is designed to get people to want to stay (in Atlantic City) because they see an opportunity,” Engelberg said. “I hope the overall experience creates a group of people who have a genuine interest in making their hometown a better place, a place where they want to raise their families, and where they can have a good life right here by the ocean, which is a special place.”

View a gallery of photos from the announcement.