A tugboat, a quickly disappearing push boat and a barge sink onto the Little Egg artificial reef off the southern end of Long Beach Island. Stockton's Marine Field Station will be monitoring the marine life that begins to inhabit the new reef material in the coming months.

Port Republic, N.J. - Just an hour after bubbles surfaced from the sinking of a tugboat, push boat and barge, the vessels resurfaced on a computer screen inside the cabin of the R/V Petrel in a sonar image mapping their final resting spots on the Little Egg artificial reef site.

Over the course of a couple hours, Steve Evert, director of the Stockton University Marine Field Station, had watched the ocean engulf three boats. Over the coming months, he along with students and other faculty will monitor the marine life that is attracted to the reef habitat.

The push boat sank first. The 140-foot barge disappeared with a final gulp after a crew sped up the process by spraying it with water to weigh it down. The tug boat sank shortly after, completing the race to the bottom. Boat horns sounded to honor the send-off. 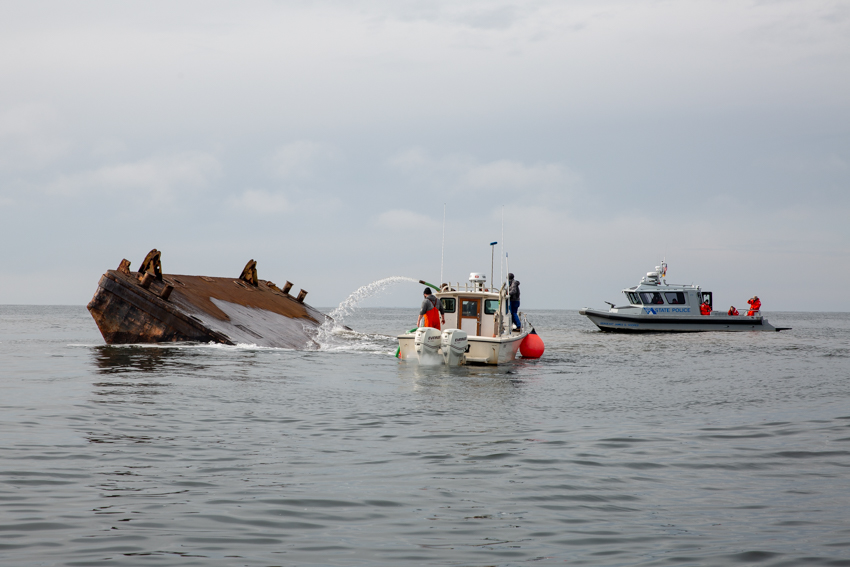 Atlantic Shores Offshore Wind, LLC, a partnership between Shell New Energies US LLC and EDF Renewables North America, is the primary sponsor of the monitoring effort by Stockton. The Beach Haven Charter Fishing Association and its junior mate program led the fundraising effort to purchase the boats.

Ørsted, the owner and developer of Ocean Wind, the state’s first offshore wind project that will be developed 15 miles off the coast, is also a supporter of the monitoring research.

“By providing student training, this project is a workforce development tool of our hydrography program that uses marine technology deployed from the University’s R/V Petrel to survey and map our coastal region,” said Evert.

ECHO81, a hydrographic consulting firm, and R2Sonic, a multibeam sonar manufacturer, are supporting the research effort by providing instrumentation, guidance and data collection protocols to the Stockton team that will be gathering imagery 3-, 6-, 12- and 18-months post-sinking.

“First we’ll use side scan sonar to acoustically image the sea floor around the reef site. The return from the signal back to the instrument will give us an (acoustic) image of how the boats are lying on the seafloor and how they're positioned,” said Evert.

A preliminary image was created immediately following the reefing as Nathan Robinson, a field station marine operations staff member, ran the software while Evert navigated the Petrel over the reef site with the sonar device in tow. The image showed both smaller ships lying directly next to the larger barge. 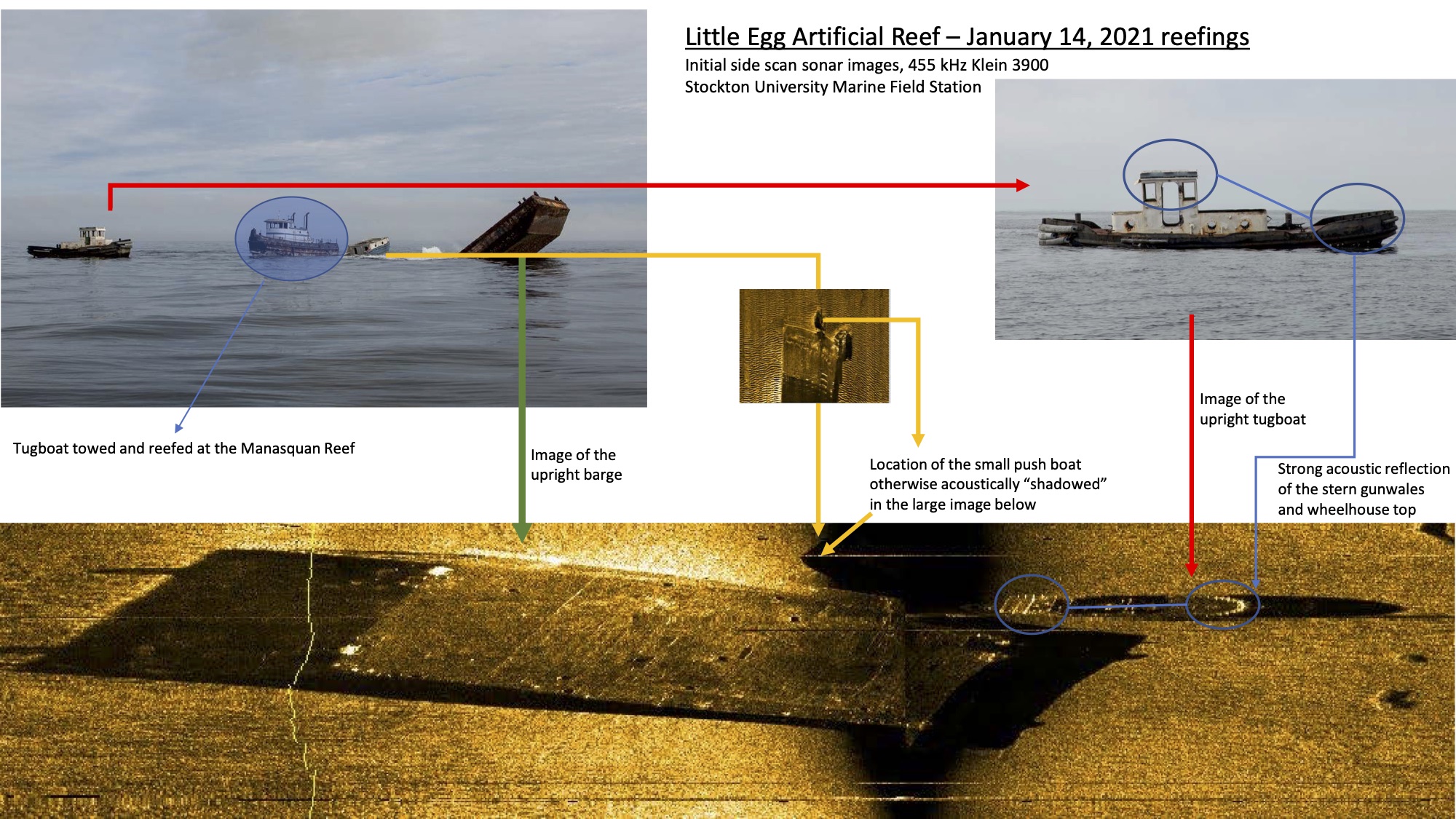 Multibeam sonar will soon add another dimension to the monitoring. “Rather than just two-dimensional imagery, it will provide 3D point cloud data, giving us x, y and z coordinates or latitude, longitude and elevation,” Evert explained.

A school of fish swimming near the reef could reflect the multibeam sound waves, and this once discarded data is now becoming a developing area of research.

Sound can be reflected by objects like fish in the water column before it has a chance to reach the seafloor or the boats on the reef, and in those instances, the data becomes useful water column backscatter.

“Over time, it is possible that we may be able to start figuring out what type of signal return a particular species provides. Some of the structure-oriented fish, tautog and sea bass at the top of the list in recreational and commercial fishermen’s line of interest as far as being edible, providing sport and having a market, are hard to access because they hide in wrecks. You can’t really catch them with nets off these structures. You can catch them with traps, but more and more, fisheries science is beginning to look at acoustics to contribute to stock assessment data,” explained Evert. 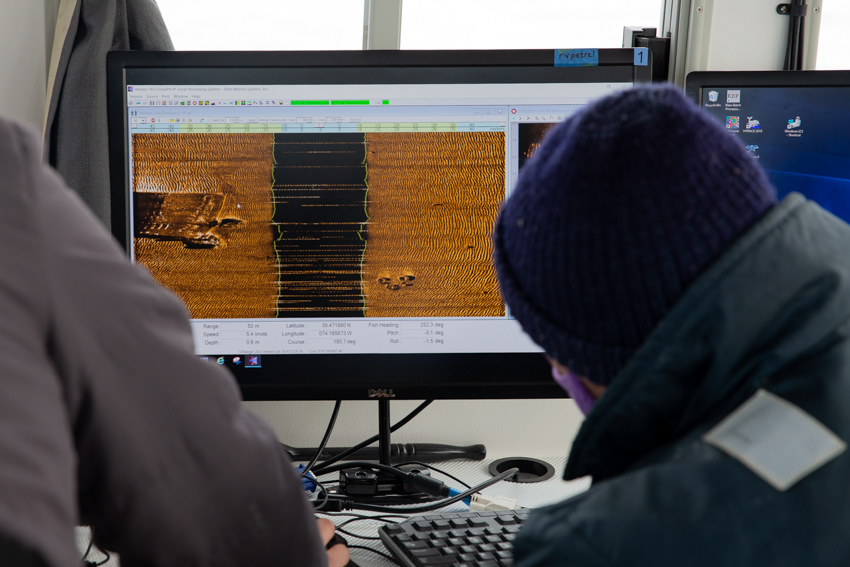 Mark Sullivan, associate professor of Marine Science, will work with students to analyze the underwater footage and help verify the acoustically derived data from the multibeam.

"The idea is to go out with the ROV right after the multibeam survey so acoustic data can be matched with actual underwater footage. If we find from the video that there's a good number of black sea bass really close to one of the sunken ships and those blobs are showing up on the multibeam images, then we can connect the two," he said.

Sullivan worked on previous research led by Peter Straub, now dean of the School of Natural Sciences and Mathematics, that collected ROV video data and helped to identify different species that use the Little Egg reef site as habitat.

Acoustic imagery is advancing the prior research.

"The multibeam will be pinging off of fish in the water column, and the technology has gotten to the point where we can start to get [fish] lengths from that backscatter data. Depending on the length and the size we can begin to understand what species are being surveyed," he explained.

The ROV has two fixed laser beams that allow researchers to compute lengths when both beams fall onto a subject. The ROV is going to provide a visual to tie in with the backscatter data to link footage with acoustic images to offer video confirmation and help verify fish IDs, Sullivan explained.

Some fish have swim bladders, a gas filled organ, that is useful for bouncing back acoustic signals, he said.

Imaging methods are especially helpful in surveying schooling fish that travel in the water column, which is out of the range of weighted trawl nets that target the bottom.

Sullivan is excited to be working with undergraduates and to see a newly deployed reef become a mature habitat with a stratification of species that associate with certain features of the reef.

Bill Figley, retired reef coordinator for the New Jersey Division of Fish & Wildlife, and John Lewis, president of the Beach Haven Charter Fishing Association, watched the reefing process go down from the deck of the R/V Petrel.

Back in 2018, Bill Figley gave a talk to the junior mate program and one of the questions they asked was ‘how can we make a difference,’ explained Lewis.

“And now here we are. The push boat is named after the junior mate program for their help in pushing this work forward,” Lewis added.

The barge is named after the Hughes Family that owns the Sea Shell Resort and Beach Club in Beach Haven for their generous $50,000 donation that was matched by the Ann E. Clark Foundation’s Sportfishing Fund.

The reefs provide habitat and a place for recreational fishing and diving, which helps to support the coastal tourism economy. 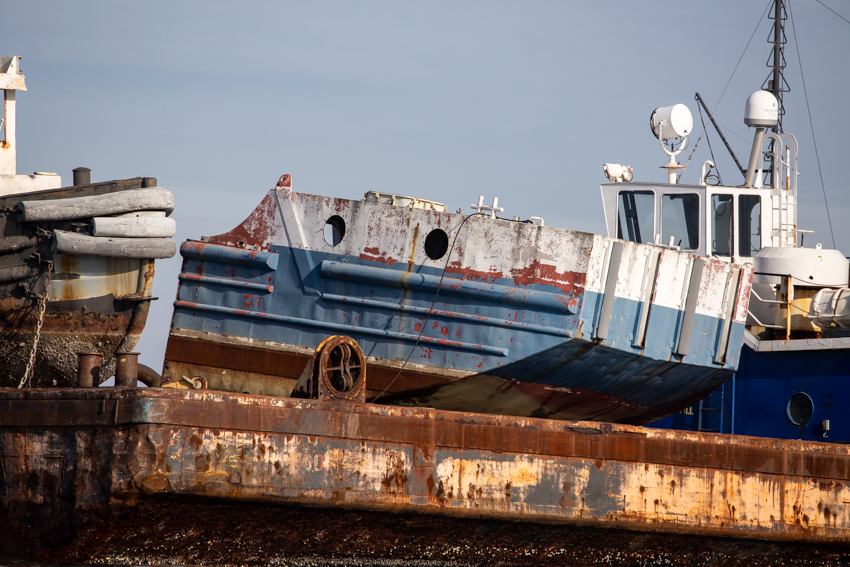 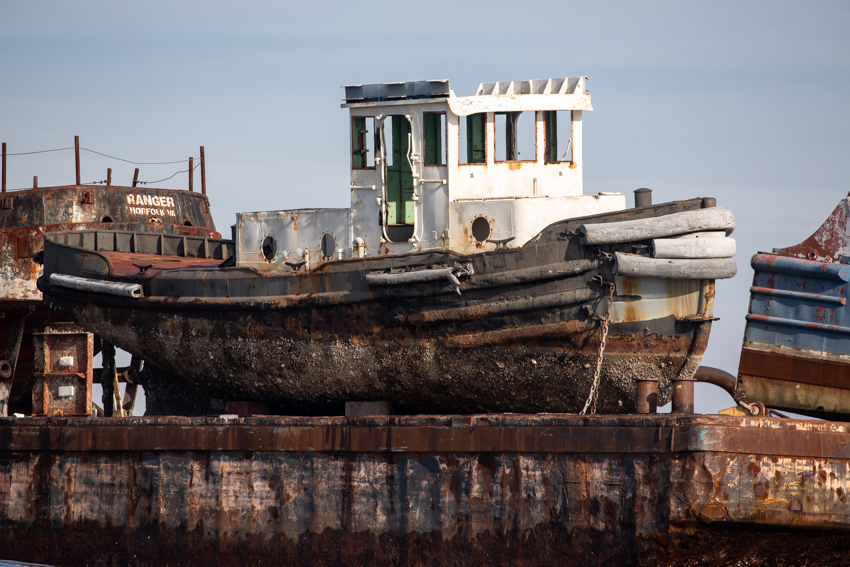 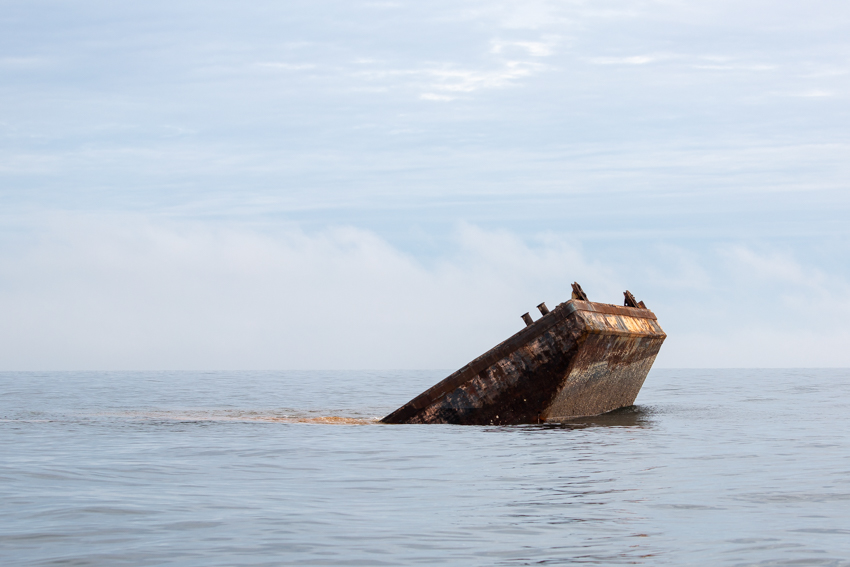 Life on a Reef

To get an idea of what lives on the reef, Figley suggests taking a look at the creatures that live on jetty rocks.

“The reefs provide a hard substrate for a lot of marine organisms—the same organisms you see on the jetty rocks, mussels in particular, barnacles, sponges, sea anemones, hydroids, all kinds of growth that carpets the reef and attaches to the steel structure. Inside that carpet you get a lot of mobile crustaceans, shrimp, amphipods, loads of different species of crabs, and that provides a lot of the food, the basic lower level of the food chain, for the bigger fish that anglers go out for. Sea bass, tautog, porgies, and a lot of fluke or flounder hide around the edges of the structures and feed on the things living on the reef. It provides a great environment for marine life and then that provides a place for scuba divers to go,” Figley explained.

Stockton students will have the opportunity to observe this variety of marine life while learning to use cutting-edge marine instruments. The skills that students learn at the Marine Field Station are potentially needed to monitor marine life surrounding offshore wind farms and ocean energy platforms.

The three boats that Stockton will monitor are expected to last 50-100 years on the bottom, and maybe even longer.

“They do hold up really well. If it’s not massive in size, it tends to sink into the bottom. Each storm scours sand away. Just like when you stand on the beach and a wave comes in and you sink down a couple inches. With a shipwreck most of it stays exposed for its lifespan because only the keel sinks in,” said Figley.

The reefs give fish a reason to stay along our coast.

New Jersey’s reefs, which have a total of 4,500 deployments, are healthy and continually under development, said Peter Clarke, New Jersey’s current artificial reef coordinator who is now continuing Figley’s work.

Clarke refers to Figley as “the father of reef development in New Jersey” and credits him with putting the program to this scale by creating 15 reef sites before he retired. There are now 17 reef sites off New Jersey. 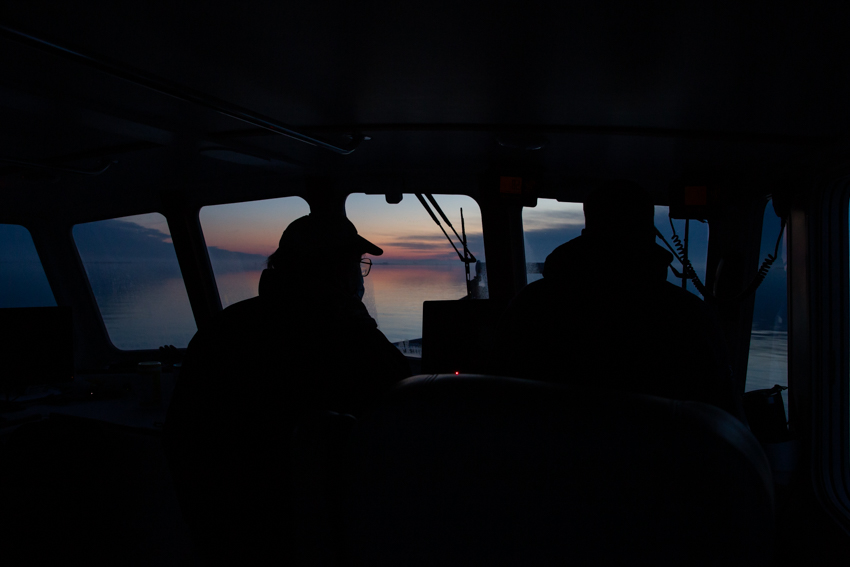 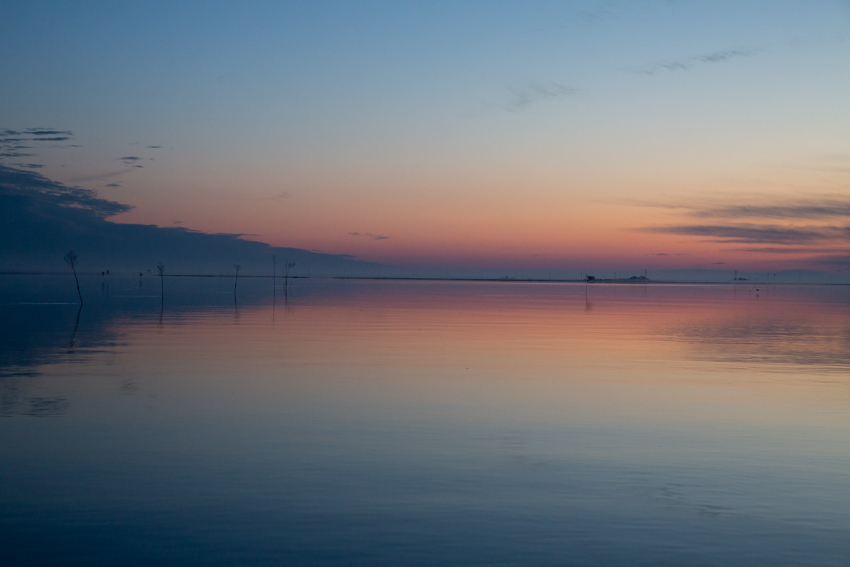 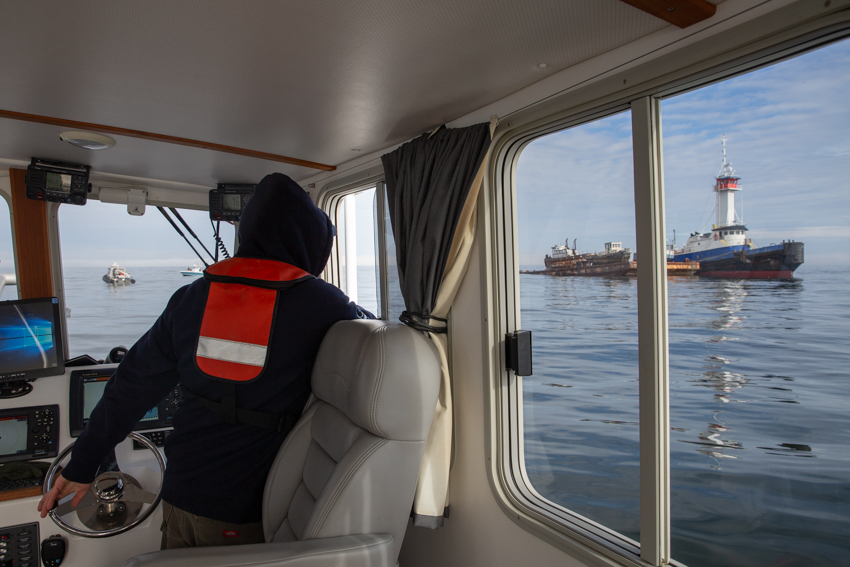 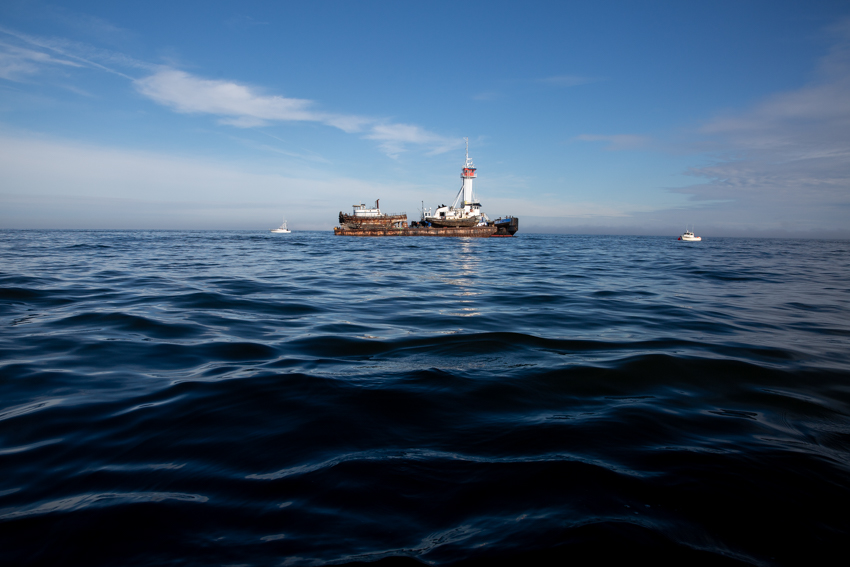 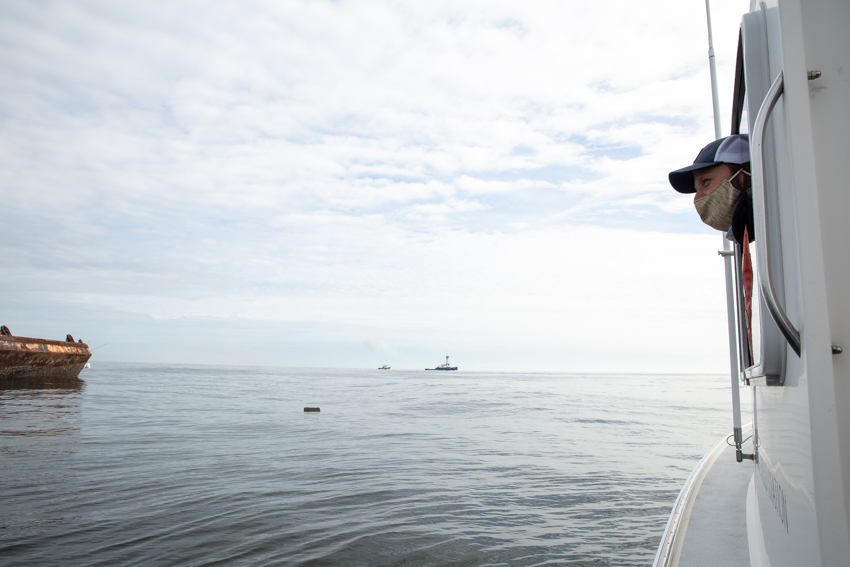 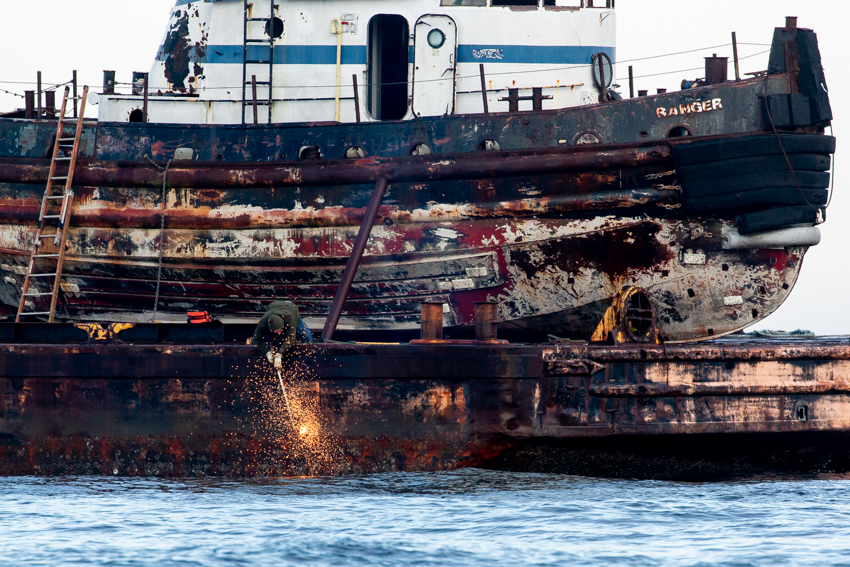 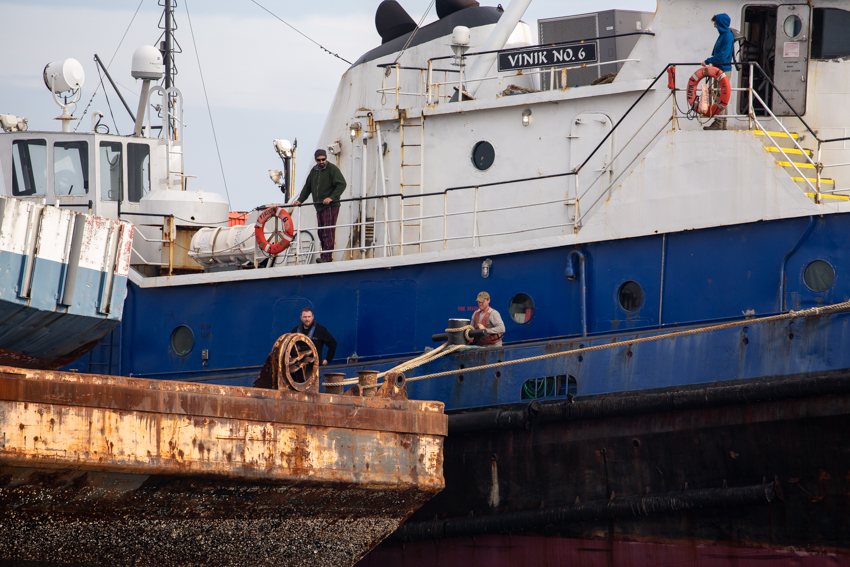 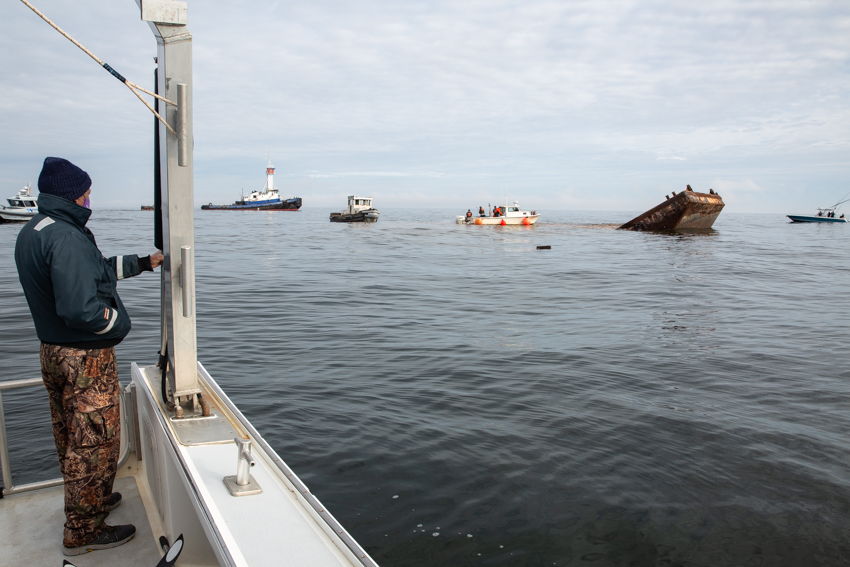 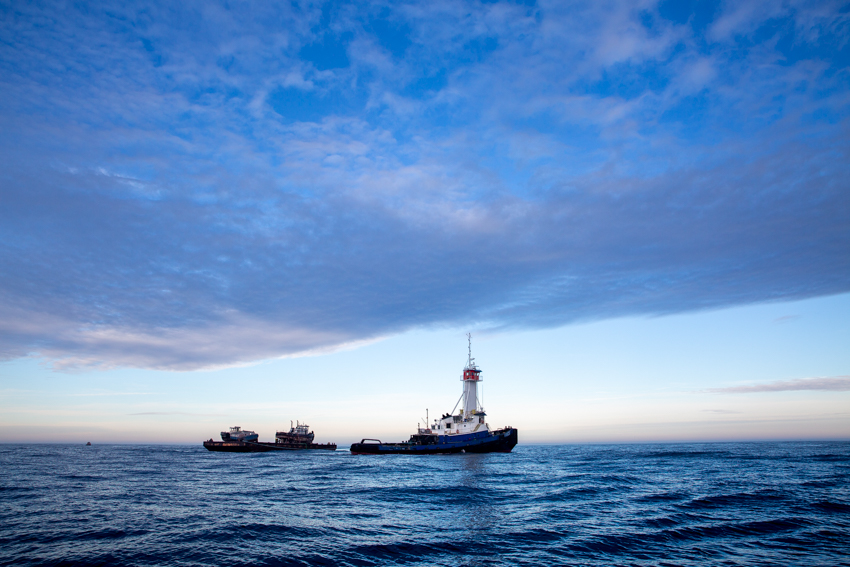 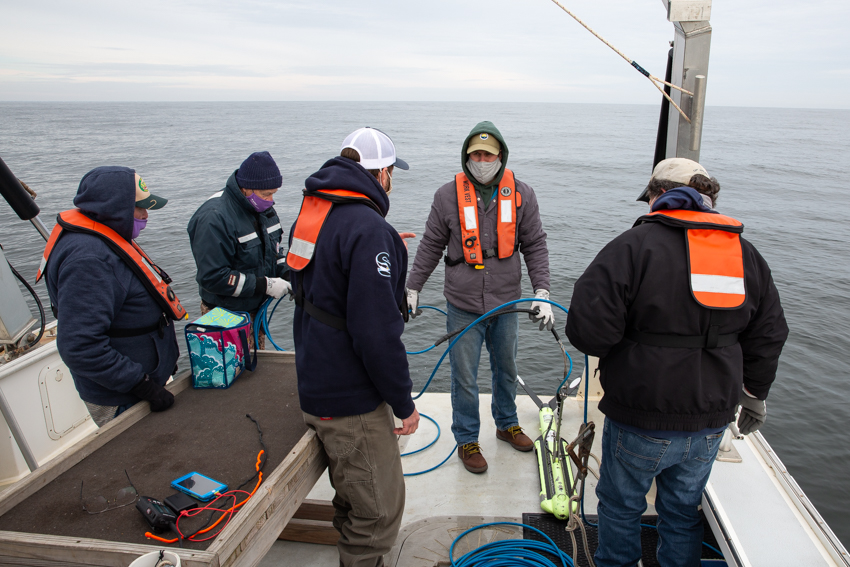 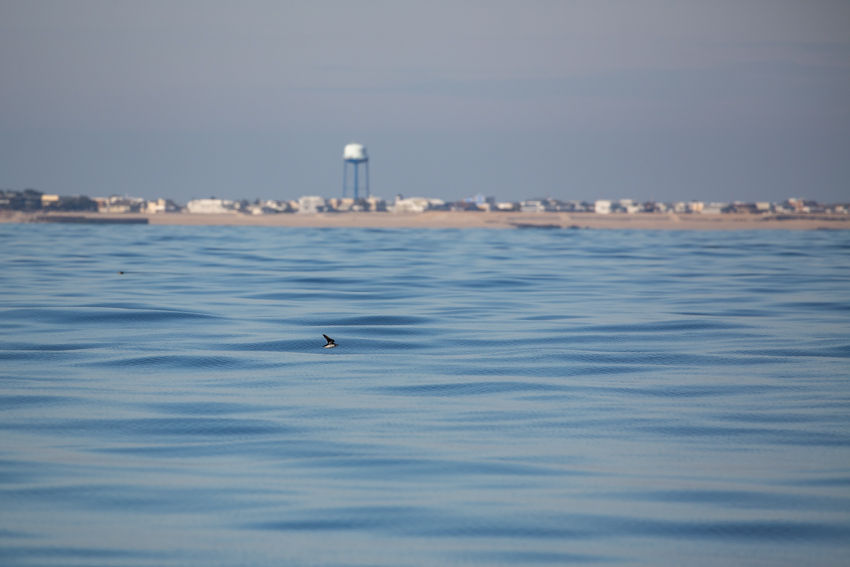 Students Seek Answers from the Reef

“Historically, the coastal waters of New Jersey had a non-descript sand bottom with very little vertical relief. States to our north have natural vertical relief in the form of rock and boulder outcroppings that occurred during the glacial recession. New Jersey doesn’t benefit from any of that, so a way to create that artificially is through habitat enhancement,” said Clarke.

The task of monitoring the reef is important work that will help to answer questions.

“Imagine the ocean as a fish bowl where each color pebble represents a species. The fish bowl can only hold so many pebbles. It doesn’t matter what color they are. The question is, do reefs take pebbles from one spot of the ocean and gather them on the reefs? It’s my opinion that the answer is no. They aren’t just moving species from one place to another, but adding to the overall biomass in the ocean,” said Clarke.

“It’s the age-old argument. No one has figured out how to measure that, but what we can measure is what each material does and how it develops and what lives on it and how they live on it and the timing of that utilization,” he added.

Those answers are coming soon from the next generation of marine scientists who are excited to start visualizing the data with the Stockton Marine Field Station.

Photos and story by Susan Allen