Dear Members of the Stockton Community,

It is with sadness that I share the news of the passing of Stephen Dunn, Distinguished Professor Emeritus of Creative Writing, whose teaching and writing inspired thousands of students and poetry lovers.  He passed away peacefully yesterday evening on his 82nd birthday.

Stephen joined Stockton in 1974, a young professor at a young college, where over a career that spanned more than 40 years he helped define a Stockton education. 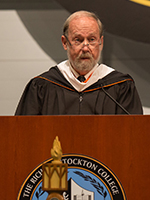 As Stockton’s commencement speaker in 2014 he talked about the value of a liberal arts education, telling students “I have no doubt most of you are prepared for What Next, which means you are ready for the inevitable crooked path that awaits you. Our area of General Studies has anticipated this, has allowed, nay insisted, that you take courses outside of your comfort zone.”

As for his own “zone” Dunn played basketball at Hofstra University where he also discovered his love of words, a love that was apparent to his students. Our own Stockton trustee, Madeleine Deininger, ’80, has cited the influence of Dunn on her own personal and academic development as a student.

We always knew Stockton had a treasure in Stephen, and the world recognized that talent when in 2001 he was awarded the Pulitzer Prize in Poetry for his book “Different Hours.”  Over his career he wrote 15 collections of poetry and received numerous awards, including the Academy Award in Literature from the American Academy of Arts & Letters, and fellowships from the Guggenheim and Rockefeller Foundations.

For all his fame, Stephen’s heart and talent were nurtured in South Jersey and at Stockton. In a 2011 interview with The Press of Atlantic City he talked about one of the poems from “Different Hours” titled “The Metaphysicians of South Jersey.”

"I think of the poem now as a kind of paradigm of my complicated relationship with place and ideas that pertain to place,” he said. “I made up the 'metaphysicians' (as a group) of course, but in a sense all thoughtful people are metaphysicians, and I liked inventing their gatherings and what they were interested in. I consider myself one of them, which is why, after many offers to teach elsewhere, I found myself staying at Stockton, and realizing what a good and rich place it was…. I felt lucky to live in a place and teach at a school that was in the process of becoming, lucky not to be living in Paris or Manhattan, or teach at Harvard. Stockton and South Jersey proved to be very good for me and my work."

Stephen Dunn was very, very good for Stockton and its students. He may no longer be with us, but his words live on.

The Metaphysicians of South Jersey

Because in large cities the famous truths

already had been plumbed and debated,

the metaphysicians of South Jersey

lowered their gaze, just tried to be themselves.

They'd gather at coffee shops in the Vineland

and deserted shacks deep in the Pine Barrens.

Nothing they came up with mattered

so they were free to be eclectic, and as odd

as getting to the heart of things demanded.

They walked undisguised in the boardwalk.

At the Hamilton Mall they blended

with the bargain-hunters and the feckless.

Almost everything amazed them,

the last hour of a country fair,

They sought the approximate weight of sadness,

its measure and coloration. But they liked

a good ball game too, well-pitched, lots of zeros

on the score board. At night when they lay down,

exhausted and enthralled, their spouses knew

it was too soon to ask any hard questions.

Come breakfast, as always, the metaphysicians

about this place and what a world it was.

For those wishing to make a memorial gift, the family is asking that donations be given to Frostburg's local and independent bookstore in his honor. https://gofund.me/bb70b52b