Above: Coaches Vashon Brock and Bernadette Ritzel give a lesson on the barge training boat. Below: a day of lessons, rowing and stretching. (Photos by Susan Allen/Stockton University)

Atlantic City, N.J. _ A cool early-morning breeze swept across the bay behind the Atlantic City boathouse.  Rowing coach Joy Lynn Cress’s voice cut through the air as she prepared her group of young girls to board their boat for the morning’s rowing lesson.

“Never let go of a floating oar,” came the answer in unison. 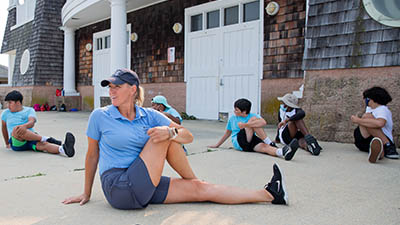 Out on the water, Cress kept up a steady patter: “Take your time. Don’t rush. Don’t be afraid to reach.”

“We would never have been able to do that with them for the first three weeks,” he said of the young rowers. “Not one kid had rowed before they came here. Now they have the confidence.”

Building self-confidence is just one of the goals of Stockton’s inaugural Summer Youth Rowing Program.  The free, six-week camp gave 33 middle school students from Atlantic City the chance to not just learn to row, but also to develop strength, self-confidence, discipline and teamwork – all starting at 7 a.m. four days a week.

The campers admit the early mornings are probably their least favorite part of the program.  But none gave up and many said they’d be back next summer.

Asked to describe the last month in one word, the students yelled out “fun,” “hard,” “pain,” and “tiring.”  But the most common word was “amazing.”

“I actually wanted to come,” said Angel Roman, 12. “It was exercise, something new to try.”

Cress said a lot of students did come because their parents signed them up.  But they kept coming, and showed up with smiles in the morning.

Parent Lia Griffin of Atlantic City was looking for something outdoors and safe her daughter, Liarian Kinlaw, 13, could do over the summer. The Youth Rowing Program fit the bill.

“She didn’t want to do it, and now she loves it,” Griffin said as Liarian nodded in agreement.

“I like getting to row in the water,” Liarian said. “I will come back next year.”

“It is hard, but it’s worth it,” said student Le Nguyen. 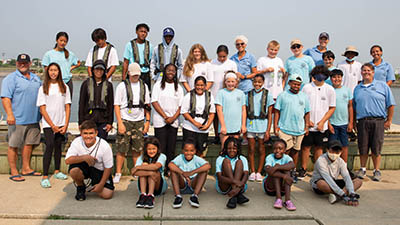 The program was developed by a group of local rowing enthusiasts who wanted to give Atlantic City’s kids the chance to try the sport they love. Funds were raised so there was no charge to the students.

The founders stop by to watch, take photos, and post on the group’s Facebook page.
“I’ve been impressed by their commitment to showing up every day,” said Linda Novelli who was interrupted by Ellen Farber, excited about how smoothly a group was rowing.

The group also helped arranged for speakers to come in during breakfast to talk about diet, exercise, teamwork and perseverance.

“We talked about self-discipline, and the lessons you learn” said Shavonne Davis, who with colleagues Roy Royster and Jack Corcoran from the Atlantic County Prosecutors Office, visited early one morning. Davis rowed for Rutgers, and Corcoran was a lifeguard.

A popular guest speaker was rower Arshay Cooper, author of “A Most Beautiful Thing,” about the first all Black high school rowing team he captained as a student at Manley High School in Chicago in the late 1990s.  The book was made into a recently released documentary, and each rower got a copy of the book.

Farber and Novelli said the success of the first summer has motivated them to look for grants for the future so the program can continue.

Stockton’s first lady Lynne Kesselman  said Atlantic City School Superintendent Barry Caldwell and the school board have also been very supportive and they hope some of the rowers go on to compete with the high school team, and then, maybe Stockton.

“I’m really proud of these kids for coming out early every morning to do something they’ve never done before,” Kesselman said as she watched from the dock with Stephen Strauss. “I just want them to have a great experience.”

Coach Bernadette Ritzel, who has coached girls’ rowing at Atlantic City High School, said she has watched the group get stronger and more social since arriving in June.

“They are outside, and off their devices,” she said. “They are setting goals, and learning to achieve something together.  I had one mom say her son might even like rowing more than video games.”

More information is online at stockton.edu/youthrowing.