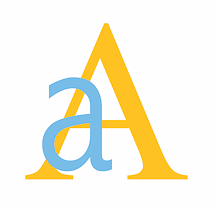 These editorial guidelines are based on Associated Press Style, which continues to change. Please use this guide and check back for updates when writing media and press releases, and copy for Stockton University webpages and publications (Stockton News, Stockton Now e-zine, the President’s Newsletter, etc.)

Questions can be directed to:

Academic Degrees
Use periods in academic degrees and professional and honorary designations.

ages
For ages, always use figures. If the age is used as an adjective or as a substitute for a noun, then it should be hyphenated. Don’t use apostrophes when describing an age range.

Use alumnus (alumni in the plural) when referring to a man who has graduated from a school.

Use alumna (alumnae in the plural) for similar references to a woman.

Do not use alumn.

Do not include a comma between the name of the alumnus and the year of graduation.

Through the Office of Student Development, more than 130 clubs and organizations and 23 sororities and fraternities are run by students with faculty or staff advisers.

Do not place newspaper names in quotes.

dash
An “em” dash is a long dash used in punctuation to indicate a sudden break in thought that causes an abrupt change in sentence structure (e.g., “I want to go to the store—I need a new dress— before the end of the day.). An en-dash is wider than a hyphen and narrower than an em dash and is used to connect numbers or dates (ranges); e.g., 1971–2004.

e-book, e-reader (these do have hyphens)

email (no hyphen)
Use as a noun; also acceptable as a verb.

ensure (see insure)
To guarantee or to make certain of.

faculty
As a singular noun, represents all of the instructors of the University (or one of its programs); takes a singular verb.

farther, further
Farther refers to physical distance. Memphis is farther away than I thought.

Further refers to an extension of time or degree. She will give the matter further study.

freshman
There’s a trend toward the use of the term first-year student, but freshman is acceptable. Singular: freshman; plural: freshmen; adj.: freshman (i.e. class)

full-time, full time
He is a full-time student and he works full time. (Hyphenate when using as adjective.)

hyphenation
Use to create compound modifiers in some, but not all, cases.

Internet
With a capital I.

intranet
With a lower case i.

(Name of Person, Name of the Office/Department)

Spell out numbers one through nine, except when referring to someone’s age (the toddler was 2) or distance or dimension (the store is 1.5 miles away; they shored up the sagging wall with a 2 X 4.)

Numbers 10 and higher should usually be written as a number:

All numbers beginning a sentence are written out.

Use roman numerals to describe wars and to show sequences for people.

For ordinal numbers, spell out first through ninth and use figures for 10th and above when describing order in time or location.

Examples: second base, 10th in a row; Fifth Avenue. Some ordinal numbers, such as those indicating political or geographic order, should use figures in all cases. Examples: 3rd District Court, 9th ward.

When referring to money, use numerals. For cents or amounts of $1 million or more, spell the words cents, million, billion, trillion etc.

off-campus, off campus; on-campus, on campus

The hyphen is used when on- or off-campus is used as a compound modifier; no hyphen when either is used as a prepositional phrase.

Example: Even though he wanted to live on campus, he ended up living in off-campus housing. (In this instance, on campus is a prepositional phrase, off-campus is modifying housing.)

online
one word, no hyphen

percentages
Percentages are given in numerals. In standard text, the word percent is spelled out.

punctuation
Use a single space after a period.

Do not use commas before a conjunction in a simple series.

However, a comma should be used before the terminal conjunction in a complex series, if part of that series also contains a conjunction.

A semicolon marks stronger breaks in a sentence flow than that represented by a comma.

Use semicolons to break up three or more individuals with titles listed in an article or photo caption.

seasons
The names of the four seasons are lowercased, unless referring to academic semesters, such as “Fall 2016.”

According to AP Style, do not abbreviate Alaska, Hawaii, Idaho, Iowa, Maine, Ohio, Texas or Utah.

Stockton University
Use the full name on first reference; “Stockton” is acceptable thereafter; also “the University.”

Use The Richard Stockton College of New Jersey only when referring to events that occurred from April 21, 1993-February 17, 2015, when this was the institution’s name. Use Richard Stockton State College for events from October 1, 1969-April 20, 1993.

Atlantic City’s City Council approved the designation of a new University District surrounding the new Stockton University Atlantic City campus on July 18, 2018. The designation supports Stockton’s role as a state-designated Anchor Institution in the city. It is intended to promote investment and development in academic and related uses within the boundaries of the district.

When publishing a telephone number, call the number to make sure it is correct.
Avoid breaking telephone numbers in text. Maintain area code presentation throughout document, using hyphens: 609-652-1776. For extensions, use ext. 177

AP Style: Use “that” for essential clauses that are important to the meaning of the sentence.

Use “which” for nonessential clauses where the pronoun is less necessary.

Use the day of the week and date prior to an event: Friday, May 12

Use the date after the event: May 12

underway
Now one word in all usages

The www reference is assumed and is not necessary, but add hyperlink

U.S.
Use periods, except in headlines.

Versus\ v.\ vs
Spell out “versus” in news releases and University publications except for court cases. See below.

The abbreviation “vs.” is permitted in headlines not relating to specific court cases.

waitlist (noun) - He was on the waitlist.

web
The following include some exceptions to AP Style. Use lowercase for all web references. Example: web, web addresses, web page, website, etc.

See that or which.

Americans with Disabilities Act / Accessibility
Please continue to check this section as the information will frequently be updated. For invitations to campus or to an event, use:

Stockton University is committed to providing equal access to its programs and facilities for persons with disabilities. Those persons with special needs should notify [telephone number and/or name of the University organization] at least 14 days before the event you will attend.

Equal Opportunity Statement
Please continue to check this section as the information will frequently be updated.
For invitations and posters, and the Stockton Now e-zine, use: