The Stockton Exhibition Project, launched in 2017, explores the history of Stockton University, including how and why the state college was named for Richard Stockton (1730-1781), a New Jersey signer of the Declaration of Independence, in 1969. Over the last two years, we’ve offered lectures and roundtables about the study of history and the processes of memorialization and commemoration, and are completing a comprehensive study about our institution's past.  The findings will be included as part of Stockton University’s upcoming 50th Anniversary celebration.

How to Get Involved

If you have a comment or question please use the button below to submit it to the Stockton Exhibition Project. We look forward to hearing from you.

Submit a Question for Consideration

What's in a Name?

Stockton University was founded in 1969 as Richard Stockton State College. It opened in the Mayflower Hotel in Atlantic City, and was later established in the Pinelands of Galloway with a mission to provide public school students with an interdisciplinary and individualized liberal arts education. Richard Stockton was not the only—or even the most logical—choice for the college’s name. Stockton had never lived or worked in Galloway. He had never owned property here, nor had he been part of any significant event in this part of the colony, later state.

The College Board of Trustees could have chosen from five New Jersey signers of the Declaration of Independence, not to mention the names of New Jerseyans involved in ratifying the U.S. Constitution, or a host of other notables from the state’s illustrious past. Geography was also an option. Indeed, of the dozen or so names initially proposed for the institution, all four of the top contenders—Southern Jersey State College, South Jersey State College, Atlantic State College, and Jersey Shore State College—preferred to commemorate place rather than a person.

Good question, and one that we are still exploring.  Stockton staff have been identifying and interviewing past administrators, faculty, and board members to learn more about the circumstances surrounding the naming of this institution. 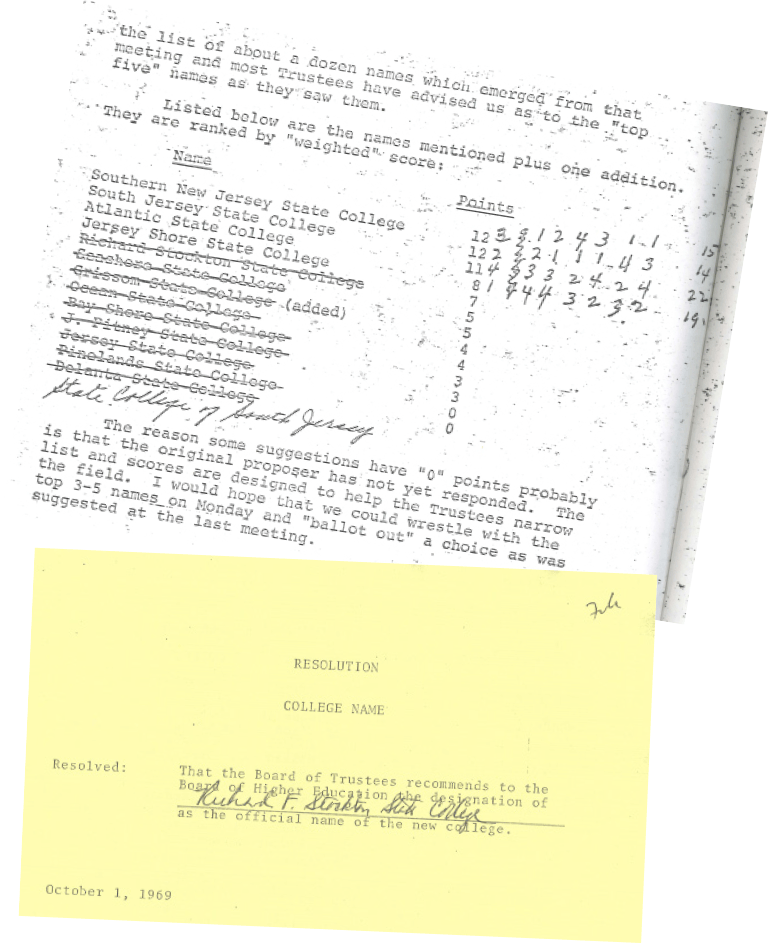 Documents of the soon-to-be-formed school 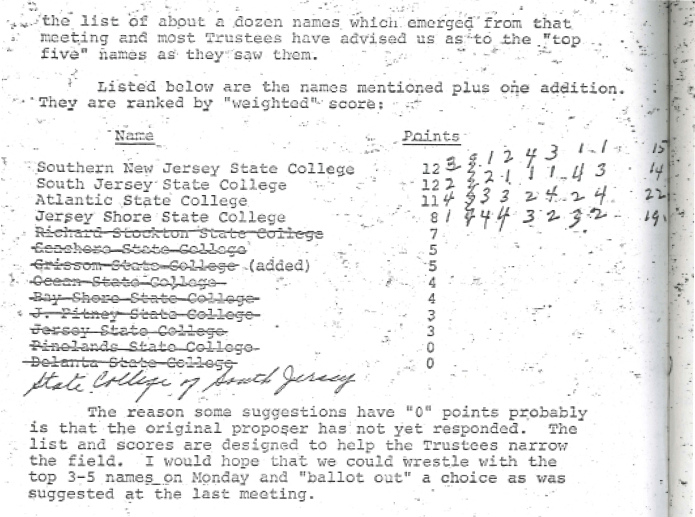 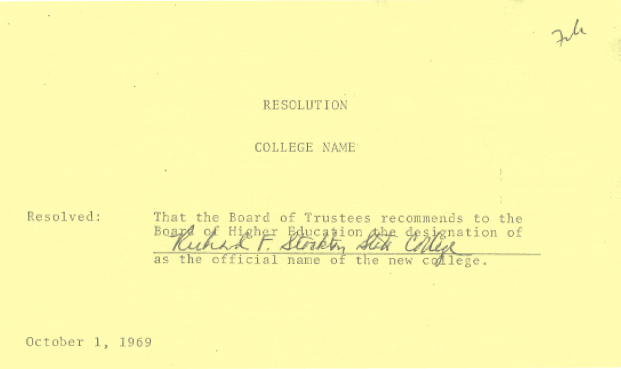 The documents above include minutes from the College Board of Trustees dated September 8, 1969 with a list of possible names for the soon-to-be-formed school. Richard Stockton State College is crossed out as it was not one of the top choices. By October 1, 1969, however, the same board passed a resolution supporting Richard F. Stockton State College as the name of record. College Board of Trustee Minutes, Bjork Library Special Collections, Stockton University.

The documents above include minutes from the College Board of Trustees dated September 8, 1969 with a list of possible names for the soon-to-be-formed school. 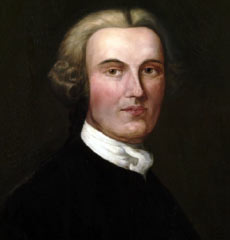 Who Was Richard Stockton?

Richard Stockton is best known as one of the five New Jersey signers of the Declaration of Independence as a member of the Second Continental Congress in the summer of 1776. It was a time of tremendous uncertainty, when a new nation was founded that celebrated the ideals of individual freedom and self-governance.

Other elements of Stockton’s life are also well known. He was born into a wealthy family in 1730, studied at the College of New Jersey (later Princeton University), and became a prominent lawyer as well as a leading political figure. Richard Stockton also enslaved people.

Did Stockton Own Slaves?

Historians have struggled with this paradox for generations without reaching a satisfactory answer. And while research might offer some insights into Stockton’s actions, we will probably never know, or fully understand, his choices.

It is difficult to reconcile that while a new nation was founded on principles of liberty and equality almost twenty percent of the population lived in bondage. But that they did so is not in question. Indeed, most of the signers of the Declaration enslaved people.

In Stockton’s case, enslaved people worked in his family home—a property he called Morven—built after he inherited near Princeton, New Jersey in the 1750s. When he died in 1781, and despite assertions during his lifetime, Stockton did not free the people that he owned. They appear in his will, when he bequeathed them, along with his other “property,” to his wife Annis Stockton: “And whereas I have heretofore mentioned to some of my negroe slaves, that upon condition of their good behavior & fidelity, I would in some convenient period grant them their freedom—this I must leave to the discretion of my wife, in whose judgment & prudence I can fully confide.”

Morven is still open to the public as a museum.

Was Stockton a Patriot?

Another question with a complex answer. Stockton signed the Declaration of Independence in July 1776, but he was captured by the British five months later and imprisoned. Within a month, he was released and traveled home carrying a pardon from two commanders of the British forces. The conditions of his imprisonment and what led to his release are questions that this project will also examine.

What is certain is that, less than a year later, after revolutionary victories in Trenton and Princeton, Stockton was called before his local Council of Safety and required to swear “true Faith and Allegiance to the government established in this State under the Authority of the People.” He did so on December 22, 1777.

A careful analysis of surviving Stockton family papers, as well as government collections, will provide a more thorough understanding of Richard Stockton. We will explore both the context of the eighteenth century, as well as his mid-twentieth-century legacy, when Stockton was transformed from a person of the past into a symbol of the present as the namesake of a new college in the Pinelands of Galloway.

The Stockton Exhibition Project is continuing its research both about Richard Stockton, the man, and Stockton, the university, and will share what it finds through this website and public programming. There will be several opportunities to participate in these discussions, and we encourage anyone interested in being part of the process to contact us for more information. 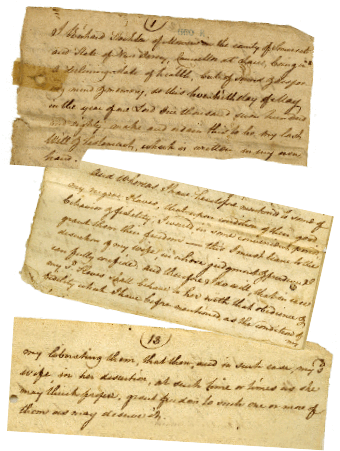 The above images are excerpts from Richard Stockton’s will, including his preamble that the document was written “in my own hand” and his discussion of slavery. New Jersey State Archives, Department of State.

Read transcriptions of these pages

Excerpts from Richard Stockton's Will

"I, Richard Stockton of Morven in the county of Somerset and State of New Jersey, Counsellor at Law, being in a declining state of health, but of sound and disposing mind & memory, do this twentieth day of May in the year of our Lord one thousand seven hundred and eighty, make and ordain this to be my last Will & Testament, which is written in my own hand."

"And whereas I have heretofore mentioned to some of my negro slaves, that upon condition of their good behavior and fidelity, I would, in some convenient period, grant them their freedom--this I must leave to the discretion of my wife, in whose judgement & prudence I can fully confide, and therefore I do will, that in case my sd [said] slaves shall behave to her with that obedience & fidelity which I have before mentioned as the condition of..."

"...my liberating them, that then, and in such case, my sd [said] wife, in her discretion, at such time or times as she may think proper, grant freedom to such one or more of them as may desire it."