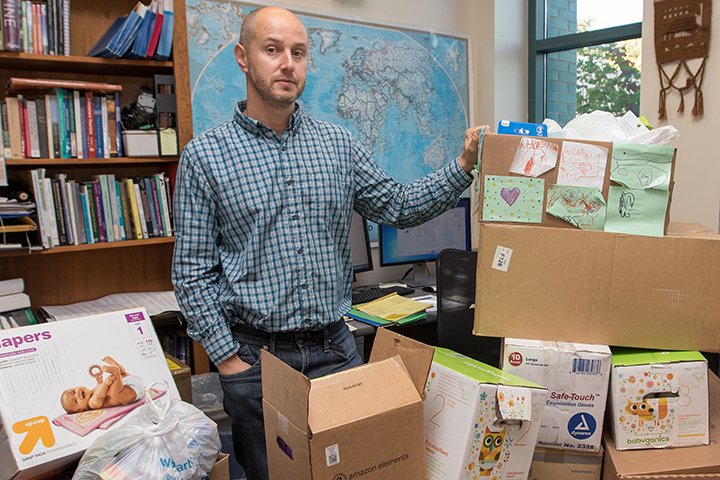 Daniel Moscovici, professor of Environmental Studies & Sustainability, reviewed his GIS 4800 - International Tourism and Development syllabus with students on the first day of class.

More than 1,500 miles away, Hurricane Irma was strengthening to a Category 5 storm bound for the northern Caribbean islands.

Moscovici’s students were planning to study abroad in Puerto Rico and Dominica in December to study ecotourism, the hospitality industry, local cuisine and natural resources.

From day one, a hyperactive hurricane season threw the syllabus into a state of flux.

Irma barreled through the Caribbean clipping the northern regions of their travel destinations. Then, a second Category 5 storm, Hurricane Maria, took a direct path through Puerto Rico and Dominica causing catastrophic damage.

“Nature rules all. So far that’s the stand out lesson from this course,” said student Bryan Drew, a senior Marine Science major.

Beyond structural damage, the impacts of the disasters hit economies hard, especially those that rely on tourism, explained Drew. “Vacationers in these paradises can easily take for granted all the hardship that resident islanders have to endure,” he added.

Moscovici quickly adapted his syllabus to focus on nature’s impact on tourism. Students began reading the news daily to follow the hurricanes’ paths and researching every Caribbean island’s hurricane history and how storms have affected their economies.

Collectively, the students discovered that there were always hurricanes that result in damage and death, but new warning systems, better technology and planning have helped to ease economic impact over the past century.

Drew always wanted to study abroad. “The stars aligned with my degree requirements and schedule,” he explained, allowing him to register for the course and its seven-day field experience in the Caribbean.

Taylor Fuchs, a junior Marine Biology major and a scuba diver, knows that her passion generates an important tourism market in the Caribbean. She enrolled to learn more about the industry in a region where she hopes to someday work.

A tentative itinerary had included a tour of the Fort Young Hotel in Dominica, originally built as a colonial military fort. The waterfront resort, now hosting relief workers, suffered heartbreaking damage after standing as a symbol of strength for two and a half centuries.

An academic detour forced the class to meet its objectives by thinking outside of themselves, explained Moscovici.

The islands have no power, no food and no water. "How can we help," became a discussion topic in Moscovici’s class that led to a full-fledged service-learning project.

“ Nature rules all. So far that’s the stand out lesson from this course.”— Bryan Drew

Fuchs proposed collecting supplies for babies and items that would help purify water. Drew proposed reaching out to federal land agencies to help the national parks and forests. Other students suggested trail work to mend the routes that lead hikers to waterfalls and scenic destinations and partnering with non-profit organizations.

Two donation collection sites set up on the main campus in Galloway filled Moscovici’s car to capacity. Items included food, first aid supplies, diapers and other donations that Moscovici dropped off to a shipping container being sent to Puerto Rico by Unidos PA’PR in Philadelphia, Pa. Working in conjunction with the class, Robert Barney, associate professor of Social Work, delivered a second carload to Vineland’s Higher Places Ministry.

Stockton at Manahawkin alone contributed a carload of supplies. “I’m so impressed,” said Moscovici, as he sat in his office surrounded by towers of boxes that would fill a third carload.

While they could not go themselves, Moscovici and his students sent their compassion to the Caribbean. 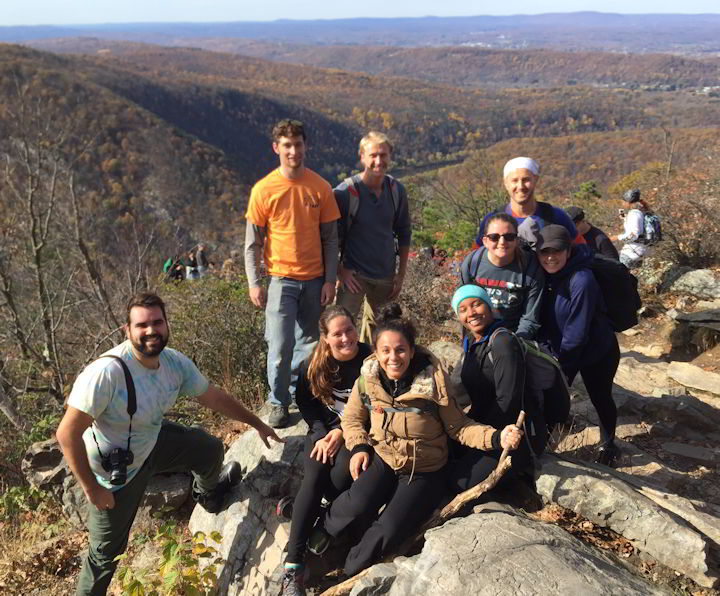 Daniel Moscovici and his students hiked Mount Tammany in the Delaware Water Gap to experience ecotourism during peak fall foliage.