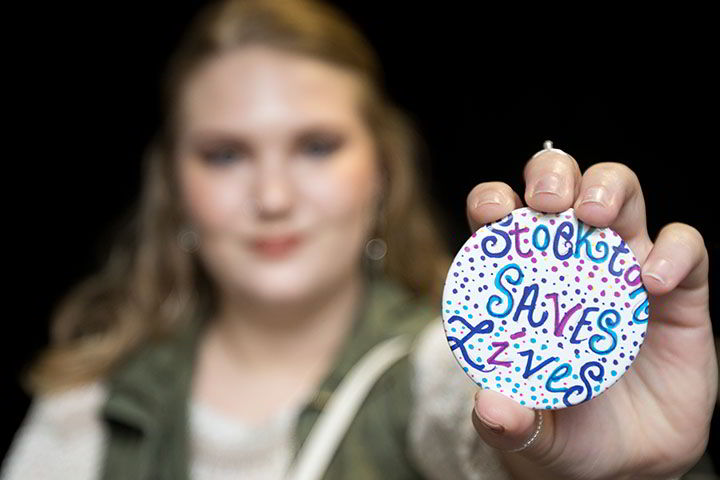 Long tables supported the weight of 269 pairs of shoes in the C/D-Wing Atrium at Stockton University this October. Unsuspecting passersby took second glances before pausing to take in the visiting exhibit, which represents the New Jersey youth, ages 10-24, who took their lives in the years between 2013-2015*.

Nate Morell, assistant director of Counseling Services, wasn’t unsuspecting; he organized the campus appearance of the “In Their Shoes” exhibit, which evoked the vast wave of sadness, anxiety and hopelessness each young person felt before making the conscious decision to commit suicide. Morell stood in silence before the hundreds of shoes, reflecting upon the symbol meant to destigmatize mental health.

Morell, who remembers suffering from anxiety since he was a child, has arranged hundreds of prevention initiatives since earning his Master of Social Work from Stockton in 2005.

After being fired for overexposing film from his first profession as a photographer, Nate fell out of work and into depression. Living with his mom, with no job and no plan, he sought volunteer opportunities from United Way. He was paired to work for the 1-800-SUICIDE hotline, receiving active listener and crisis training, and picked up every available shift at the 24-hour call center in Yardley, Pa.

“I loved it,” said Morell of volunteering at the call center. “I was connected with people on the edge of life and I learned how to listen. All of a sudden, I knew what I was meant to do.”

Born out of his “brokenness,” he was able to heal and Stockton provided a beautiful next path, said Morell of continuing his education in Social Work, and later returning to work as a licensed counselor at the University where he now leads the Suicide Prevention Team efforts for the community.

According to the American Foundation for Suicide Prevention, 44,193 Americans die by suicide each year. On average, one person dies by suicide every 11 hours in the state of New Jersey.

“The average length of time between the onset of mental illness and the time when someone seeks help is seven years,” explained a horrified Morell. “In those seven years, that’s when we lose people. We need to get people support early so that we can save thousands of lives. There’s no stigma against heart health or pancreatic health. You wouldn’t wait seven years to get your heart checked. This is brain health.”

Morell is calling for a revolution in health and wellness and it’s all about de-stigmatization, prevention, positive therapy, mindfulness and gratitude. 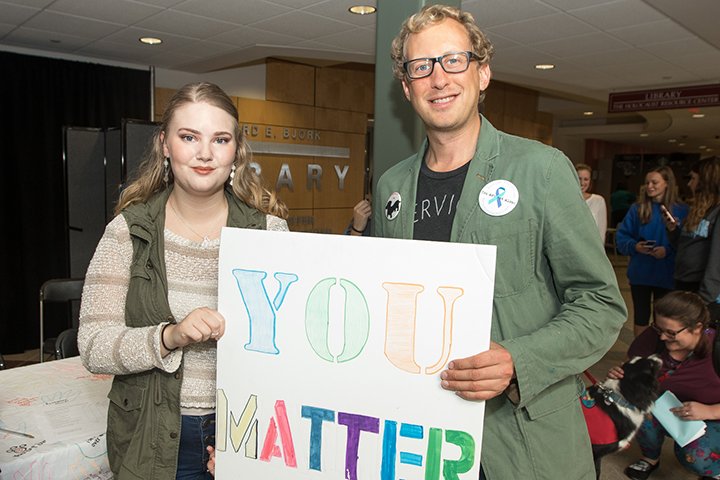 Courtney Burgoyne, a senior Social Work major, and Nate Morell, assistant director of Counseling, at one of the events during Stockton’s Suicide Prevention Month.

This fall, the Suicide Prevention Team hosted more than 20 events for Suicide Prevention Month, themed, “Healing and Hope.” The team screened 980 students for depression and suicide, and connected hundreds to support services. (Last year, 40 percent of those screened had elevated levels of depression.) Six hundred people walked proudly through the heart of Stockton’s main campus in Galloway for suicide awareness that focused on remembrance, support and prevention.

“ You wouldn’t wait seven years to get your heart checked. This is brain health.”— Nate Morell ’05

Other events featured coping skills workshops; “Veterans’ Monologues,” which shared real-life experiences from veterans; mental health workshops for fraternity and sorority members; and memorial tables. Kim Raring, a nutritionist and adjunct instructor at Stockton, hosted a lecture on “Food and Mood,” sharing how the quality of the food we eat affects the quality of our daily performance. 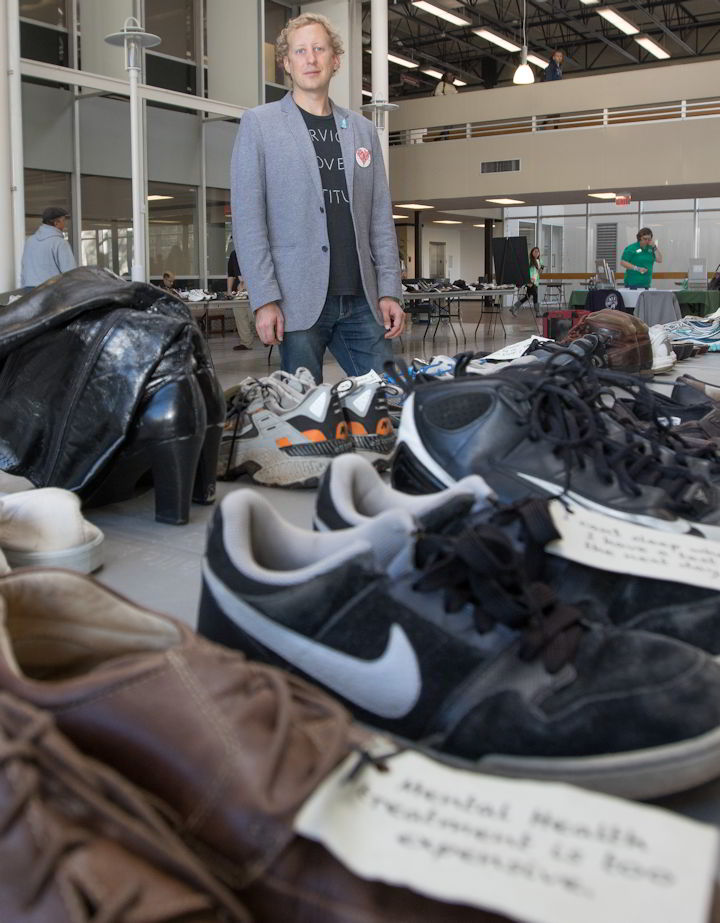 Nate Morell, assistant director of Counseling Services, at the "In Their Shoes" display on campus. The shoes symbolize the lives lost to suicide.

In addition to what we put into our bodies, Morell also emphasizes “eco-therapy,” spending time outdoors in nature; physical activities such as yoga; and connecting with the community.

“The coolest part of Stockton is that over the past five years, the Suicide Prevention Team has received zero push-back from anyone on campus,” Morell said. “Our fall events went from one half-day event the first year to more than 20 this year, and everyone has been willing to help. The University keeps opening all these doors and the team gets help from so many people.”

The University’s suicide prevention efforts have even received national recognition recently – including a Telly Award for last year’s The Resiliency Project, a documentary aimed at preventing suicide and erasing the stigma of confronting mental health issues, and the Active Minds Chapter of the Year Award in 2015.

“Everyone is always focused on the external and what [the Suicide Prevention Team] is doing is focusing on the internal. Some people who look beautiful on the outside are really struggling. We’re all struggling in our own ways – and people are really good at hiding it – so why don’t we all lift each other up?” Morell asked.

“The numbers are high and suicide is preventable. Love has to go both ways. Ultimately, what we’re giving out to others is a reflection of what we feel inside,” he continued. “Little acts of love and community are really important. Smiling, saying hello, or opening the door can really save someone’s life – and we can all do that.”