It was a season of “firsts” for Stockton University’s rowing program. After welcoming Coach John Bancheri as Stockton’s first full-time rowing coach earlier in the season, the women’s varsity eight team earned the first-ever Dad Vail Regatta medal by an Osprey varsity eight boat at the prestigious races May 10-11 on the Schuylkill River in Philadelphia, Pennsylvania.

The Stockton women's team also rowed a varsity four boat that finished 12th overall and a novice four that took 17th place. The Stockton men’s club team had a good showing as well with the varsity four finishing second in the fifth final and the novice eight taking third in the third final.

Bancheri, who is working to build what he calls an “Osprey Navy," said the success of the team this year was a community effort of Stockton personnel and supporters. The team is young – mostly freshmen and sophomores, so they still have a lot to look forward to.

“Dad Vail was a showcase for what we can be,” Bancheri said. “No one expected much of us this year. But the team believed they could do it, and they did. I can’t wait to see what we can do with a full year to train.  Stockton has become a viable academic and athletic option for rowing.”

“My goal in high school was always to row in the Dad Vail,” said freshman Michaela Pope.

“We are the foundation to build to the goal,” said teammate Chloe Schulze. 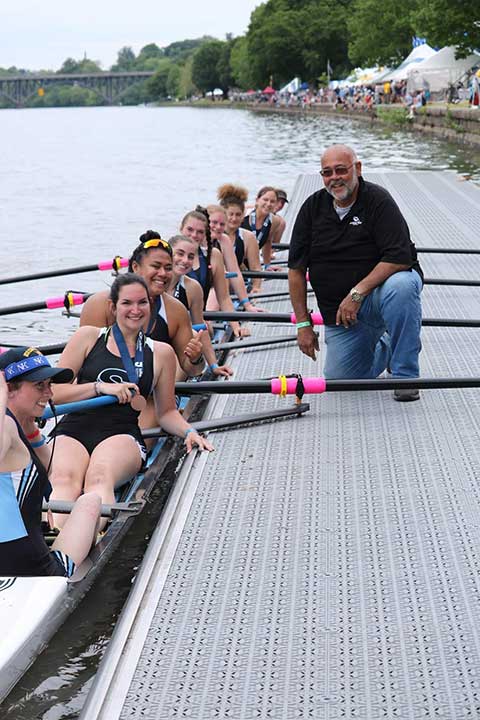 Bancheri is an Atlantic City native who rowed for Atlantic City High School in the early 1970s. Since his arrival, the size of the women’s rowing team has doubled. Team members come to 6 a.m. “erg” training sessions wearing T-shirts that say “The Shape of Things to Come.”

“To cap off a terrific season, Stockton Rowing is ranked 20th nationally in the most recent row2k Collegiate Rowing Poll for DIII and #121 for all rowing programs combined (DI, DII, DIII),” said Kevin McHugh, executive director of Athletics & Recreation. “We are so proud of Coach Bancheri and the Osprey rowers on the amazing advancement of the program in less than four months.”

“We are giving back to a community that supported us as adolescents and young adults,” said Karen Alton, granddaughter of Elizabeth Alton, a driving force behind Stockton’s founding, whose family donated funds for two of the boats. “With your help Stockton will win a national championship.” 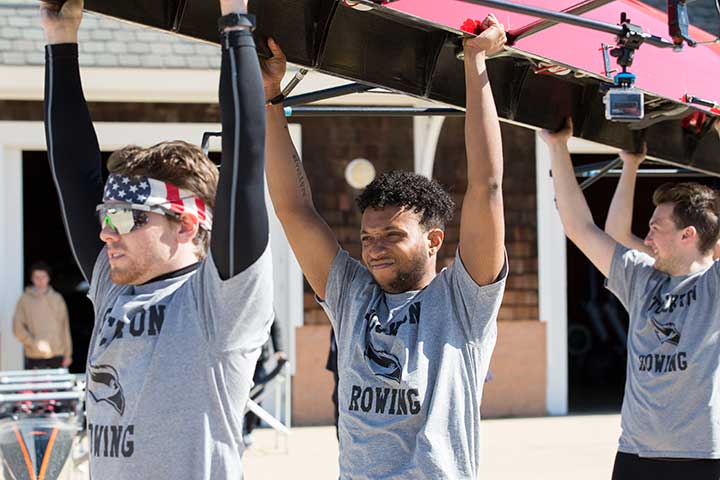 Stockton's men's rowing club competed in a home race on March 24 in the back bay of Atlantic City with Cabrini College and the University of Rochester. | Photo by Susan Allen ''09, M.A. '14

The Stockton rowing program, both women and men, is based at the Stockton University Atlantic City, just steps from the beach and boardwalk. Stockton's rowers share the Atlantic City School District boathouse, a short walk from campus, and part of the University District.

“My grandparents, Elizabeth and John, used to watch the boats rowing on the back bay, and we are part of the history of rowing in Atlantic City,” she said. “Our wish is that this will help develop a championship program.”

Alton also shared a message from her aunt about how Elizabeth Alton always strove to make the possible from the seemingly impossible. She challenged Stockton to see what could be possible for Stockton rowing and keep raising the bar.

“We are doing things we’ve never done before and we want them to help build it,” he said.

A Stockton University Rowing Advisory Committee has been formed.

Several businesses and supporters have already contributed to helping the team grow.

Previti and Smith have been named honorary team physicians.

“My mission is not just to win,” Bancheri said, “but also to grow the spirit of rowing in the area.”

Stockton President Harvey Kesselman said the expansion of the rowing team is part of the University’s commitment to Atlantic City, where a new residential campus opened in Fall 2018. He said the first thing they did was to contact members of the local rowing community for advice and assistance.

“I pledged we would build a program we would be proud of, but we knew we couldn’t do it alone,” Kesselman said at the event honoring Bergman. “We need the support of our rowing community. We do have national level supporters.” 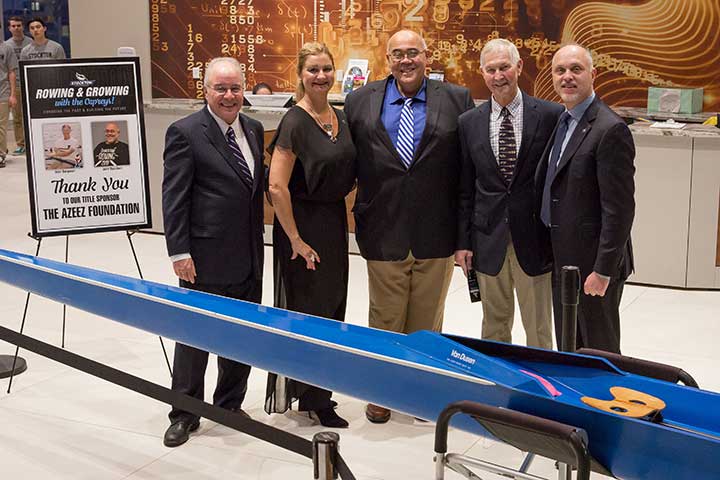 Stockton held its first races on the back bay in Atlantic City on March 24, 2019 before an enthusiastic crowd. View coverage of the AC Rowing Regatta.
View Comcast Newsmakers coverage of the Stockton University rowing program.