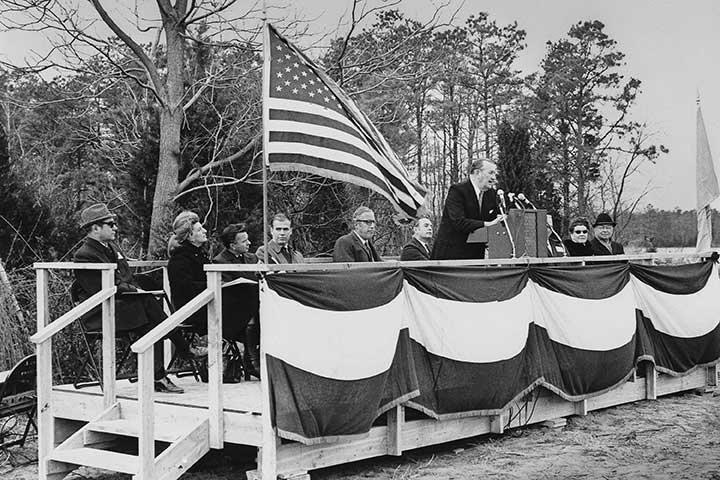 Fifty years ago, the vision of expanding educational opportunities to southern New Jersey became a reality when legislation was passed to establish a new college.

Elizabeth Barstow Alton, a founding member of Stockton’s Board of Trustees, and State Sen. Frank S. Farley, are credited for playing an influential role in advocating for the four-year college.

"My grandmother, Elizabeth Alton, fought tirelessly to bring education into South Jersey at a time it so desperately needed it,” explained Karen Alton in the Fall 2016 issue of Stockton Now. “She made it her own personal mission in the 1960s to place the next New Jersey college in the southern portion of the state.”

President Richard E. Bjork, members of the Board of Trustees, and their spouses in the late 1960s. | University Archives

The year, 1969, marked the beginning of many firsts in Stockton’s history. In addition to the historic legislation, 1,600 acres in the Pinelands National Reserve in Galloway Township was selected for the site of new campus, members of the Board of Trustees were appointed and Richard E. Bjork was named the first president of the college.

In 1971, Stockton held its first academic semester at the former Mayflower Hotel in  Atlantic City before opening its new campus in Galloway in January 1972.

During those early years, Stockton’s “founders” — the inaugural board and class of students, faculty and staff — helped shape the direction and essence of the institution. Below are a few perspectives on Stockton’s beginnings, but there are countless more that tell Stockton’s incredible story. As the University approaches its 50th anniversary in 2021, Stockton Now will feature additional testimonials of University students, faculty, staff, alumni and supporters in future issues. 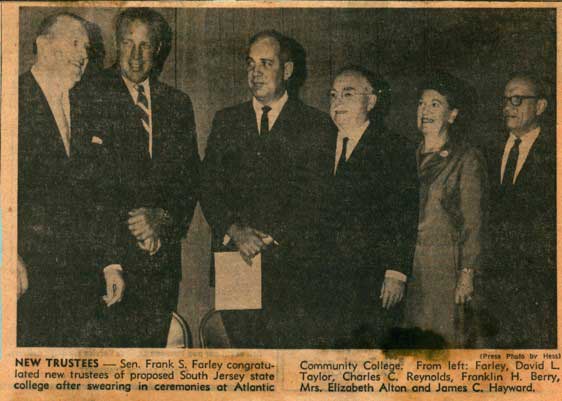 David Taylor, a graduate of Princeton University and civil engineer, served on Stockton’s original board. In a recent interview, Taylor explained how Ralph Dungan, New Jersey’s first Chancellor of Higher Education, had asked him to transfer from the Trenton State College Board to the board for the new college, which became Stockton.

“Of all my civic duties, Stockton hands down was my favorite,” said Taylor, who had served on Stockton’s Board for 10 years, including two years as chairman. “I felt it was more important and creative than almost any other board. This mattered.”

Taylor described the board as a “good collection of people," who “worked really well together.”

“We got to know each other fairly soon in the process after a couple of meetings and we discussed philosophically how we should set up the college and then we decided to get going. We hired Dick Bjork [as president] and some other people to actually get it started,” he said. “We realized that we couldn’t make the philosophical decisions without having staff on board, developing ideas for us and making suggestions to us.” 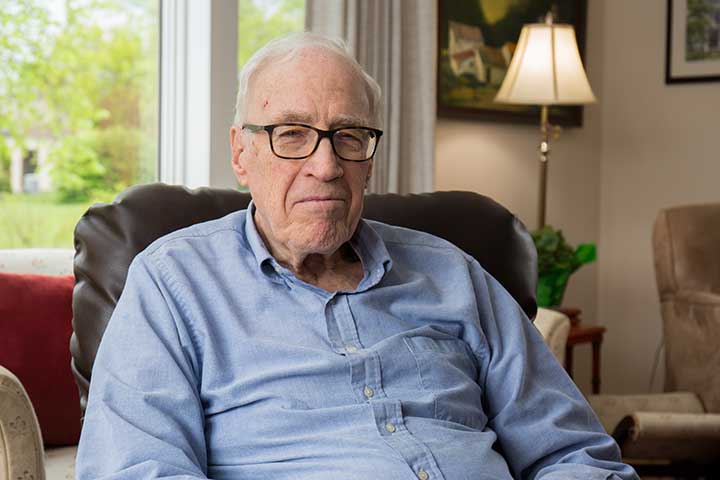 David Taylor, a founding member of Stockton's Board of Trustees, in his home in Medford, New Jersey. | Photo by Bernie DeLury

Taylor explained that the Galloway location was selected because Stockton was intended to offer a quality institution where students could commute from home and make cultural, intellectual activities available in the area.

Taylor said the most exciting moment during his tenure on the board was “when we opened our doors, when we took in students and had a faculty to teach them.”

As a member of Stockton’s inaugural class at the former Mayflower Hotel, President Harvey Kesselman recalls how the makeup of the first cohort of students and the current events at the time set the energy of the new college.

“The events were student-driven. There were no RA’s, no complex director — you were the adult. Those were the times. We opened up in 1971, a third of our students were Vietnam veterans. They had already served in war,” he said. “You also had the whole anti-authority movement in the United States. We wanted to be in control of our lives.” 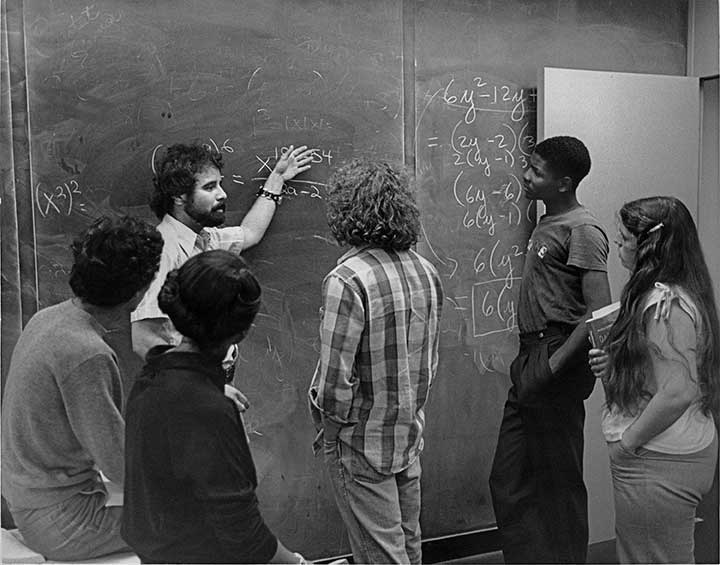 That mentality blended with Bjork’s founding philosophy of student as an adult, which was evident in everything including the curriculum, explained Kessleman.

“For example, students had substantial authority over their own curriculum," Kessleman said. "There were very, very few requirements at Stockton. It was up to the students to figure it out and navigate through with the assistance of a preceptor who was also a faculty member.”

Eric Sommer, also a member of the inaugural class and creator of The Argo’s original masthead, thrived in that type of environment. “There was just this explosion of creativity and that carried out to the campus,” he remembers. “The environment supported you. There were no restrictions.”

Sommer said Stockton “absolutely” changed his life and he credits Brooke Larson, who was among the original faculty members.

“Meeting Brooke Larsen was the greatest thing that ever happened to me,” he said. “He was an intellectual powerhouse.” 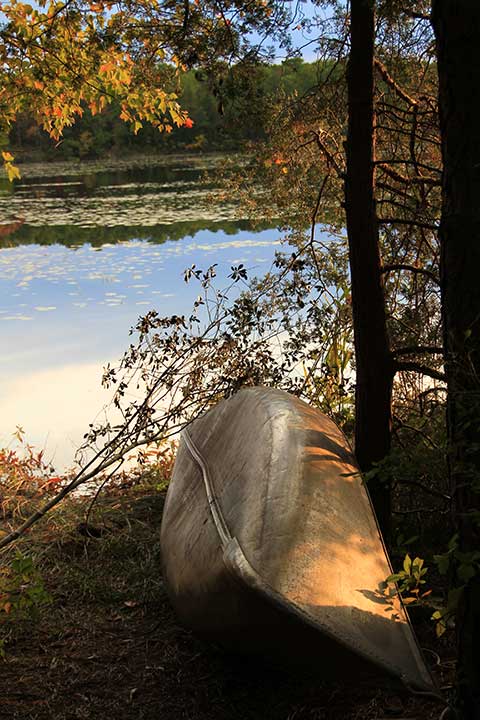 Eric Sommer, a member of the inaugural class, is credited for being the namesake of Lake Fred on the Galloway campus. Read more. | Photo by Susan Allen

Since the early years, Stockton has evolved into a nationally ranked, vibrant university. This past fall, the University's enrollment reached 9,621 students. Stockton opened the doors to two new academic buildings on the Galloway campus and a new beachfront campus in Atlantic City.

Taylor said he is amazed by Stockton’s growth.

“My expectations were more modest than the size and quality of the institution and what it has become,” he said. “I’m amazed by what it is now.”

In addition to being part of the inaugural class, Kesselman has had the opportunity to serve in many administrative roles at Stockton, which have not only prepared him for his current position as the University’s president, but have also given him a unique view of Stockton’s history and community.

Kesselman reflected on several threads in Stockton’s DNA that has enabled  the University to move forward and grow.

“We are extraordinarily resilient as an institution and we almost always come completely together when we are faced with external pressure,” he said. “We have always had core people with an incredible work ethic.”

With the help of student interns, Kinsella and Tompkins crafted a website designed to display Stockton yarns and folklore, highlight notable members of the Stockton community and invite viewers to share their own “Stockton Stories."

“We intend to organize [the site] around a dozen contexts that have influenced what we were, what we are and what we will become,” Tompkins explained.

In addition to designing the website, interns were responsible for unearthing and archiving stories in the University's Special Collections, interviewing alumni, creating visuals and much more.  New interns are recruited every semester as part of the course COMM 3916-001.

Some of the content found on the site include: the origin of Lake Fred’s name, the truth about the first five deans, and the legend of Le Villain, an anonymous phenomenon that used to steal parking tickets off cars in the 1970s. There are videos of Mayflower students sharing memories, montages of Stockton dance throughout the years, and even a stylistic visual of the famous cedar bog in the snow.  There is also an interactive timeline viewers can utilize to travel through Stockton’s chronology, from its construction clearance in 1968 to today.

Stockton community members — both former and current — are invited to share their stories for the project. If you would like to participate or to learn more, visit stockton.edu/stories.