Literature Major with Minors in Latin and Philosophy
Spring 2019

Shilo Previti wouldn’t consider herself a born reader.  “I didn’t learn to read in kindergarten or first grade, and at the end of first grade they told me that if I didn’t learn to read it was going to be real bad. In second grade I still really struggled to read, but then over the summer between second and third grade I taught myself,” she recalled. She read and listened along to the audiobook of a biography of Benjamin Franklin, a self-taught person himself. “I read very slowly, so in third grade I read three more books, but in fourth grade I read, like, 200 books. At some point I really figured it out.” Previti’s family moved often when she was a child, so reading became a source of familiarity and constancy in her life: “It’s always been good to go and get a library card from somewhere. They tell you that you can only check out three or four books, but a couple days later they know they should just let me have more of them, so they don’t have to talk to me as often, or at least not as many times in the same day,” Previti joked. “I read all of the time.”

Previti originally came to Stockton to study Secondary English Education but changed the concentration of her Literature major to Literary Studies. Her strong writing skills caught the attention of her professors right away: “in my second semester, Emily August, [Assistant Professor of British Literature], wrote on my first paper that I handed back, ‘I think we should talk about graduate school.” Dr. August later advised her to take a course with Lucio Privitello, Associate Professor of Philosophy, whose feedback on a proposal for a paper was, “where are you applying to grad school?” 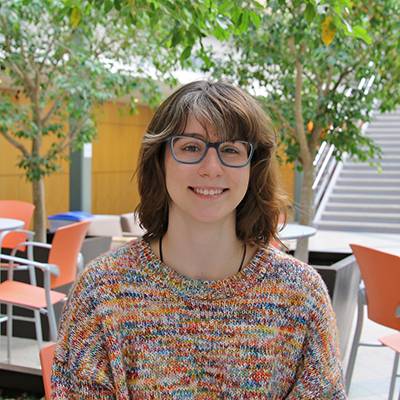 Previti’s experiences outside the classroom have also shaped her career path. Her preceptor, Adam Miyashiro, Assistant Professor of Literature, encouraged her to take the Writing Tutor Practicum with Pam Cross, who has shaped much of her experience at Stockton. “Pam definitely is a wonderful human,” Previti said. Working as a writing tutor made Previti feel integrated into the campus community. “I’m on campus all of the time and I know hundreds of people, so sometimes it’s difficult to move quickly in the hallway,” she said. Previti’s job as a writing tutor eventually led to the opportunity to work as a tutor for Stockton’s EOF program; in addition, she is now the Head Writing Tutor and a teaching assistant for a linked section of Critical Thinking and College Writing given to first-year students whose writing skills require extra attention. “This week they’re handing in their final papers and I’m very emotional,” Previti told us, with a note of pride in her voice.

As Head Writing Tutor, Previti also has the responsibility of interviewing applicants for instructors of the first-year writing courses. One of the faculty Previti interviewed, Alexsondra Hultquist, Assistant Professor of Critical Thinking and First Year Studies, encouraged her to apply for a foundation scholarship, which Previti used to help Dr. Hultquist in compiling notes for the sixth volume of a Cambridge University Press republication of the literature of Aphra Behn. “I helped write the head note for the sixth volume of this big section of texts on the first woman novelist in English. We traveled to libraries and I got to touch a lot of old books, which was really exciting,” Previti said.

In addition to her work with the Tutoring Center, Previti is also involved in the Pappas Center for Hellenic Studies. Katherine Panagakos, Assistant Professor of Latin, asked her to become the student editor of their newsletter, The Hellenic Voice. Their community organization, the Friends of Hellenic Studies, encouraged her to apply for a scholarship to study abroad. As Previti is interested in foreign languages, she decided to study Italian in Rome to immerse herself in the language. She struck up a conversation with a woman on a train who later invited her to dinner at her family’s house on the Amalfi coast after Previti helped her find her daughter at the station. “It was awesome,” Previti said. 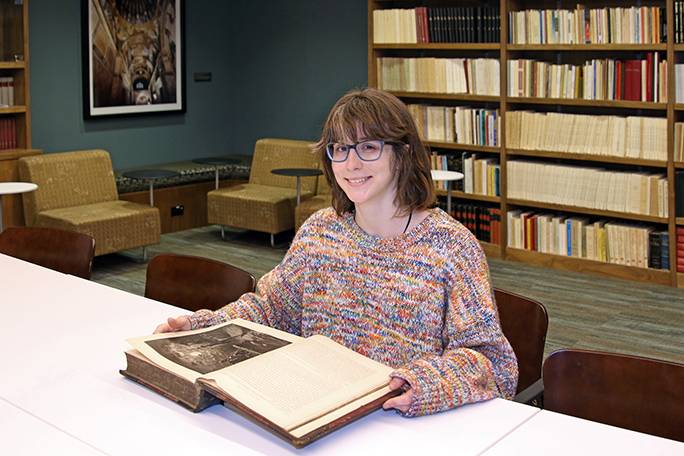 Previti’s work for the Pappas Center caught the attention of David Roessel, Professor of Greek, who chose her as one of the students to travel to the island of Hydra and Athens, Greece in September 2018 to present a performance on the Australian writers George Johnston and Charmain Clift, who lived in an expatriate artist colony on Hydra after WWII, for the conference “Writers, Dreamers, Drifters and the Aegean.” “They had very different interpretations of what goes on, on the island, and what their lives are like. He writes very sad fiction and she writes very happy nonfiction about the same day, all the same conversations, the same dinner party, but just very different personalities,” Previti described. The students wrote, edited, and practiced the scripts for eight plays, in which the writers were the characters, their lines taken directly from their own texts. Previti and the other students then performed the plays in the actual locations they were about as a “place narrative experiment.” At the request of the conference director, Previti also developed a script on the end of the colony based on the unpublished diaries and manuscripts of another writer, which she used to conclude the conference. Impressed by Previti’s professionalism and writing skills, the conference directors invited her to apply to graduate school at their university, which she is considering.

When asked what advice she would give to prospective Arts and Humanities students, Previti said, “The best things I’ve gotten to do have been experiences outside the classroom.” She counsels students to not be afraid to reach out to faculty whose work sparks their interest, or who could help them explore subjects they’re interested in, for help with how to apply to conferences and for funding. Previti also strongly believes that studying a subject she has a passion and talent for, while concurrently pursuing extracurricular opportunities, will pay off, even though she did not have a clear career path in mind when she began her degree. “Sometimes it’s important to do things that feel important at the moment and see where they lead you.  I think it’s probably riskier to be doing something that makes you unhappy,” she explained.

Previti is preparing to apply to graduate school in Fall 2019 for a master’s or PhD in either comparative literature, indigenous studies, or linguistics. She is confident that wherever she ends up will be where she’s meant to be. Paraphrasing one of the mystic philosophers she studied for her Philosophy minor, Previti maintains that it’s okay if students don’t know what their “end goal” will be upon entering college. “You should see what happens. It’s important to be lost because in the losing you find something.”