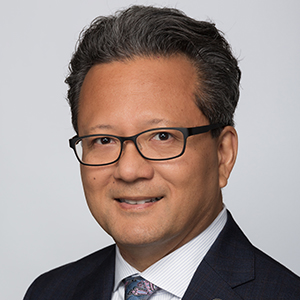 As Vice President for Personnel, Labor & Government Relations, Michael oversees operations related to human resources, labor relations, and equity and workplace related functions for the University and its over 1,750 full-time and part-time employees.  In his Government Relations role, he works with the Governor’s office, Legislature, Congressional delegation, and other public officials, as well as the business community, on advancing the university’s initiatives.  These include advocacy related to equitable State funding, economic development, investment in higher education, and formation of a regional aviation/aerospace industry.

Michael serves on the boards of the National Aviation Research and Technology Park, and Stockton Affiliated Services, Inc. Michael is also a member of the President’s Cabinet and University’s Leadership Council.

Previously, Michael served as Vice President of Administration and Finance where he was responsible for the University’s business and fiscal affairs including Procurement, Bursar, Finance and Budget, Controller, and Accounts Payable at a time when the university’s operating revenue approached $220 million.

Michael’s over 25 years as an attorney includes leadership in the legal, business, governmental, and higher education sectors, as well as grass roots community organizations. Following several years in private practice, he served in the Office of Chief Counsel to the Governor of New Jersey advising on matters involving higher education, banking, insurance, consumer affairs, economic development, and public finance.   He was then appointed by the Governor to serve as Executive Director/CEO of the New Jersey Higher Education Student Assistance Authority (“HESAA”).  Under Michael, HESAA’s assets grew to over $9 billion.  He managed 200 employees, overseeing all Authority operations.

Michael received a Bachelor of Science Degree in Financial Management from The Catholic University of America in Washington, D.C. He received a Juris Doctor from the Rutgers University School of Law.  Following law school, Michael served as judicial clerk to the Honorable Frank M. Lario, Jr., Superior Court of New Jersey.  He has been admitted to practice law in New Jersey, Pennsylvania and Washington, D.C.  Michael also obtained an MBA with a dual concentration in Finance and Management from the Rutgers University School of Business.

Michael is a 2004 Fellow of the Lead New Jersey Program.  He was honored as the Professional Lawyer of the Year by the New Jersey Commission on Professionalism in the Law, and is the recipient of the New Jersey State Bar Association Service to the Community Award.