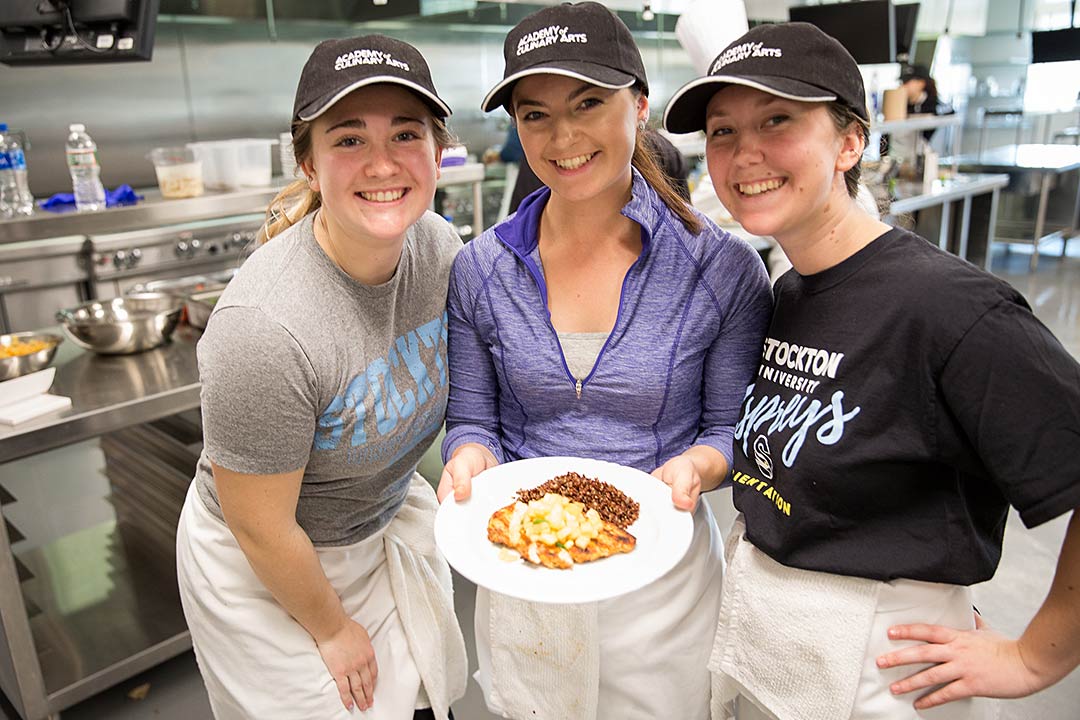 Hospitality Students Get Cutting-Edge Kitchen Experience
For four Fridays in April, students in the Advanced Food and Beverage Management Class at Stockton University are offering invited guests a chance to taste what they have learned.

This spring, 14 Stockton University Hospitality & Tourism Management Studies students are getting hands-on “back-of-the-house” experience in the new class, offered for the first time through a partnership between the Academy of Culinary Arts at Atlantic Cape Community College and Stockton.

Stockton University will offer a Bachelor of Arts Degree in Africana Studies starting in the fall 2019 semester.

The degree program builds from the Africana Studies minor program, which has been at Stockton since 1983 and provides students greater opportunity to study, analyze and evaluate topics from an Africana perspective.

Some 70 students, faculty and staff attended a launch party for the program on April 4.

Conference Focuses on Female Victimization
About 100 people attended the Female Victimization Across the Lifespan Conference held on April 12 in the Campus Center Event Room on the Galloway campus. Attendees included faculty, staff and students from Stockton University, as well as professional practitioners.

“AC Campus Movie Nights: Cinema in the City” is featuring Spiderman: Into the Spiderverse at 8 tonight in the Stockton University Atlantic City residential classrooms B119/120. Attendees are asked to bring their Stockton IDs. 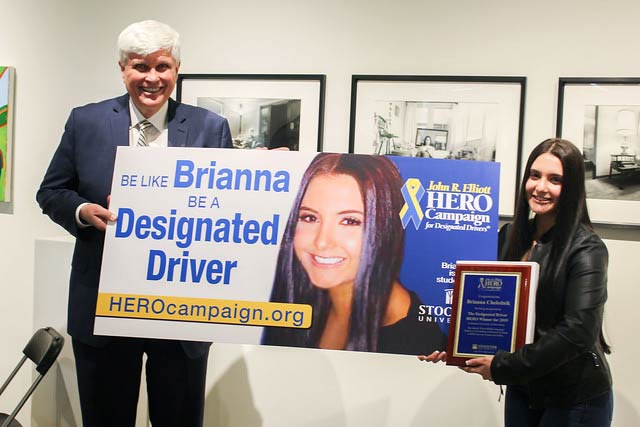 Sophomore Brianna Chelednik, a Public Health major at Stockton University, was named the 2019 Hero of the Year by the John R. Elliott Hero Campaign for Designated Drivers at a ceremony in the Stockton Art Gallery on April 15.

Chelednik will be a spokesperson for the campaign and will be featured on the Hero Campaign billboard on the Atlantic City Expressway, donated by ClearChannel, which promote the use of designated drivers to reduce drunk driving. 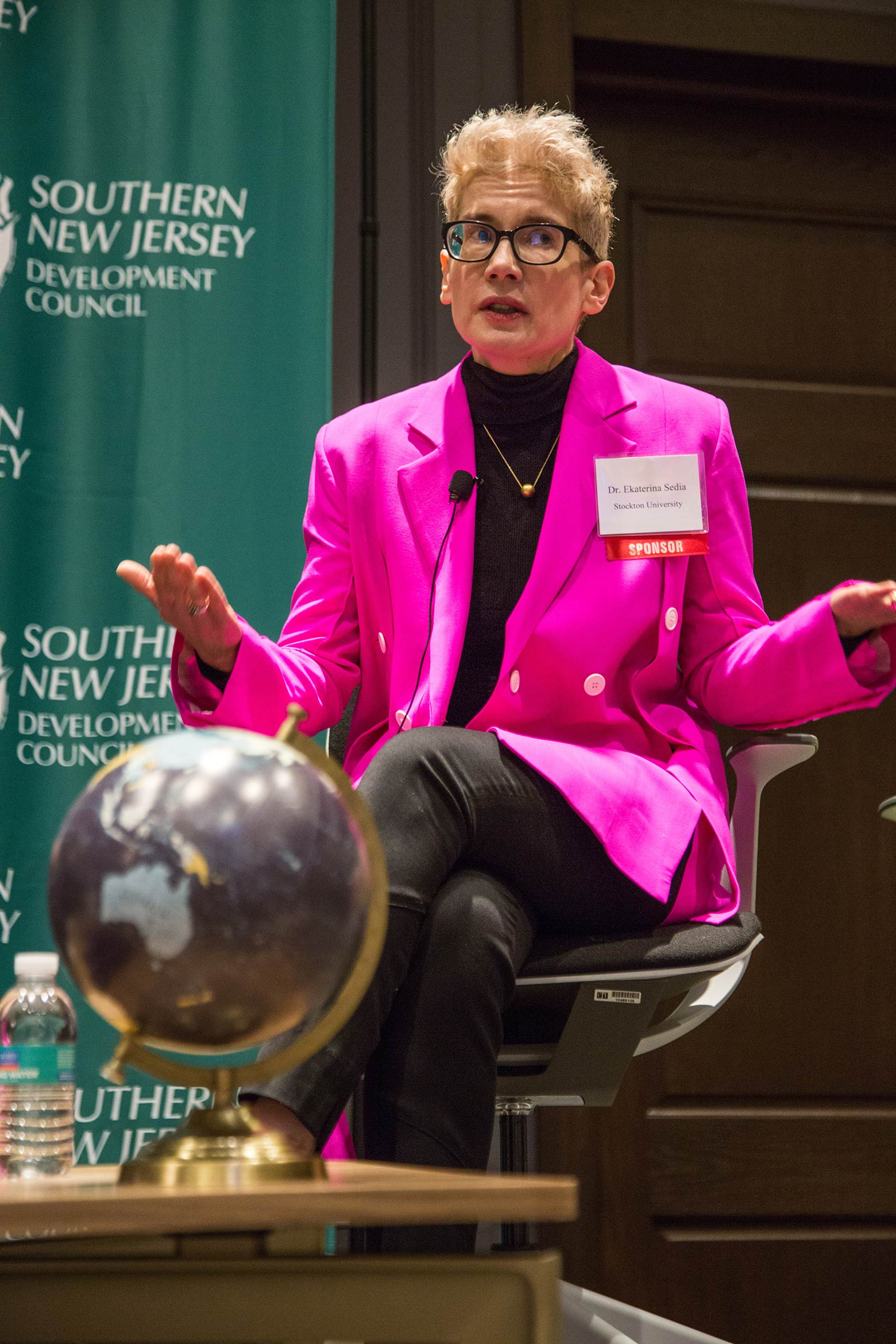 Ekaterina Sedia, associate professor of Biology and coordinator of the Cannabis Studies minor at Stockton University, was a panelist for “Cannabusiness in South Jersey: Economic Implications & Considerations” at the SNJDC Sound Off for South Jersey Legislative Conference on March 22 at Resorts Casino Hotel in Atlantic City.

The panel facilitated discussion focusing on the emerging topics impacting the business community as it relates to New Jersey’s pending expansion of medical cannabis and adult-use legalization. These issues included workplace implications, workforce development, and state economics and regulations. The moderator was Benjamin Dworkin, director of Rowan Institute for Public Policy; and the other panelists were Assemblyman John Burzichelli and Sean Dalton of Cooper Levenson Attorneys at Law.

“I really appreciated the opportunity to be a part of the discussion that reached so many employers, legislators and politicians. Stockton University has been committed to fostering and shaping the discussion of the issues surrounding the cannabis industry in N.J., as well as educating our students on the employment possibilities in this new field, and we plan on staying engaged in this debate as legislation continues to evolve,” Sedia said. 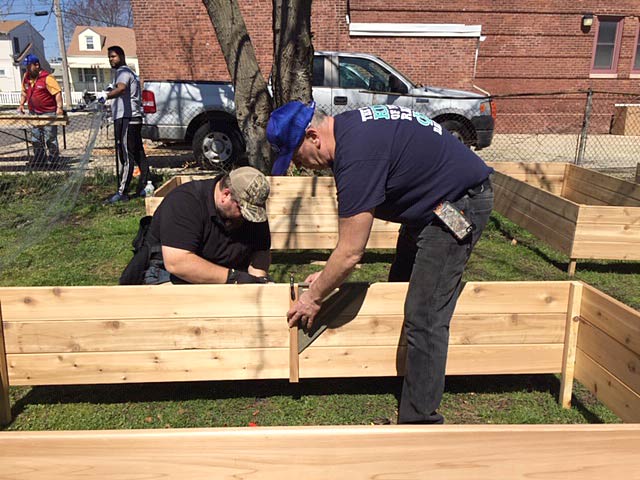 David Lockwood, a 2018 Sustainability graduate, who helped build Stockton’s own community garden, volunteered his time to help create the beds in Atlantic City; and members of the Stockton University Community Garden Club are donating seeds and seedlings for them.

“The hope is Atlantic City residents will claim the beds. Much like the name, the gardens will foster a sense of community and responsibility in their owners,” said Joe Rubenstein, professor of Anthropology and faculty adviser to the Community Garden Club. “The Atlantic City Fire Department may claim two beds so they can cook for the fire house next door. It's a unique opportunity for Stockton to collaborate with local partners to help bring the concept to life.”
The ACUA donated the soil for the project and Lowe’s provided 20 volunteers that assisted. Students from the Stockton Community Garden Club will also be taking part in the project once the garden begins to bloom.

PHOTO: David Lockwood, left, works with an Atlantic City Fire Department member to build one of the eight beds for the community garden project in Atlantic City. 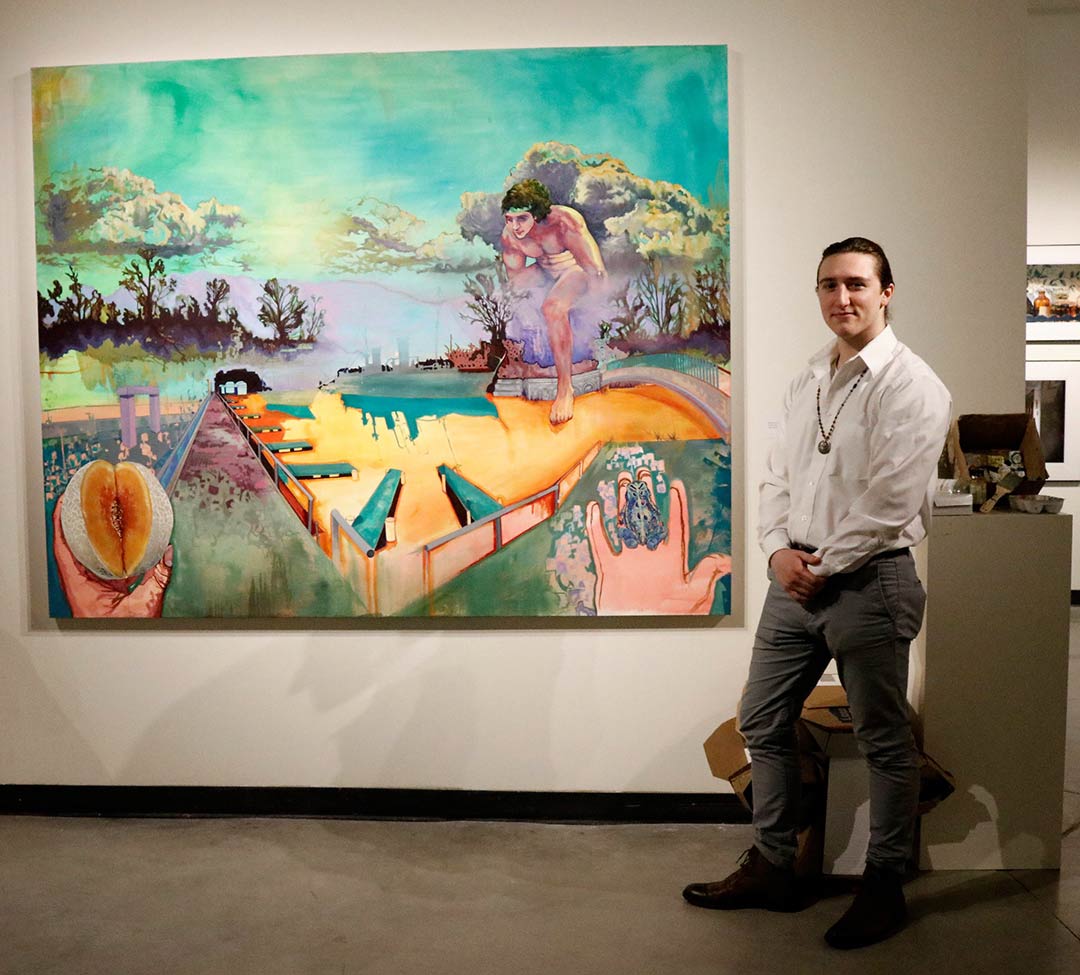 Bachelor of Fine Arts students are displaying their art pieces in the 2019 BFA Senior Exhibition, which opened April 7. Twenty seniors are participating in this year’s display, which includes painting, photography, sculpture and visual communications.
“This is what we’ve been working towards all year,” Erica Tamburello said.
Tamburello’s exhibit is made up of doodles she has drawn as a stress reliever. She used her knowledge from her Graphic Design major to turn her collected drawings into art pieces. 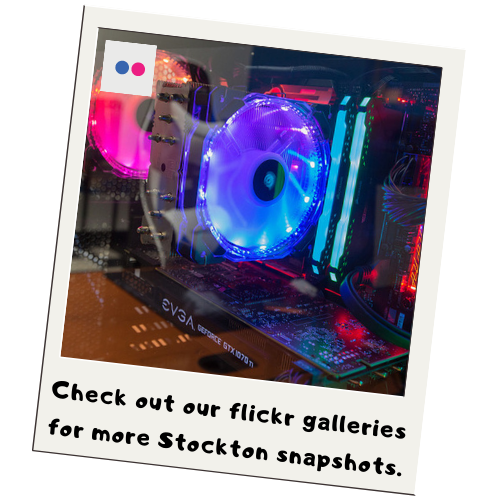 Twitter: Niya Calloway is choosing to broadcast her future as a Communications Studies major at #StocktonU. You may already know her from her radio show gr00vy g00dness on WLFR.

Facebook: #TransformationTuesday: Students living on the Galloway campus have a beach, too. Members of Sigma Pi hosted a beach cleanup and replenishment recently at the Oasis behind the Lodge at Lakeside. 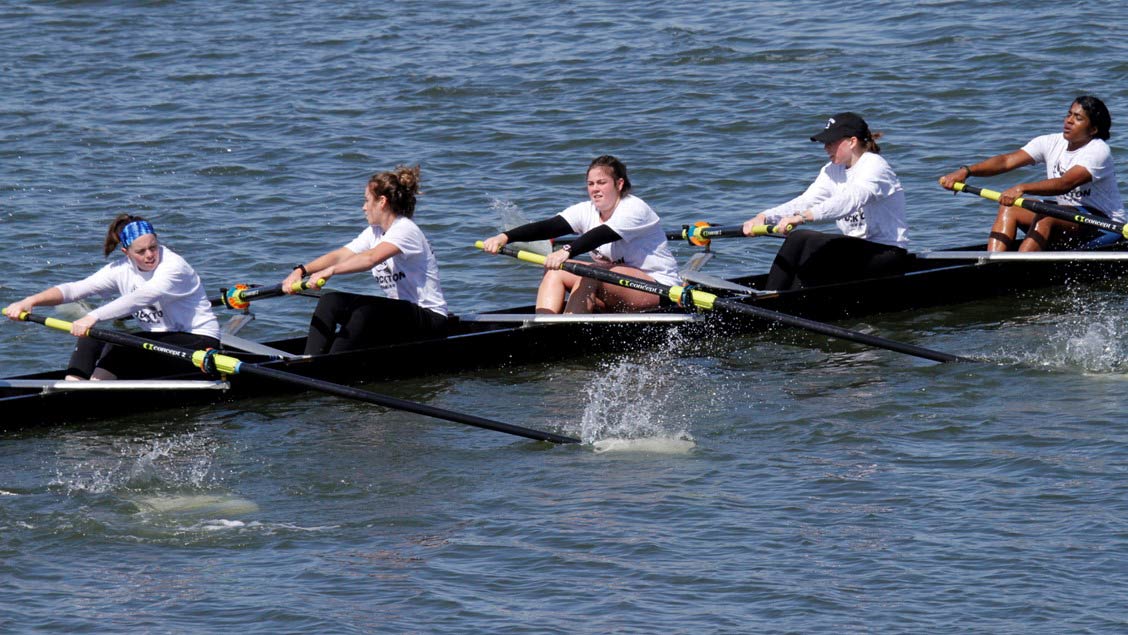 After a two-week layoff, Stockton University Women’s Rowing returned to action at the Knecht Cup on the Cooper River last weekend. The Ospreys rowed in three races, competing against fellow NCAA Division III squads in the varsity eight, varsity four and frosh/novice eight.

Kening Named Coach of the Year 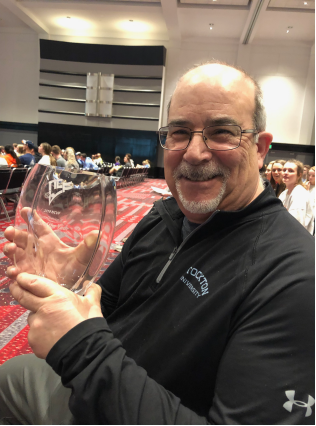 Stockton is competing this week in the Men’s National  Collegiate Volleyball Championships held at the Colorado Convention Center.

A new Strategic Plan draft is available for review and can be accessed by logging into your GoStockton portal.

Do you have students who are looking for financial aid assistance? The Office of Financial Aid is hosting “FAFSA Fridays” from 11 a.m.-1 p.m. every Friday, through April 26, in the F114 computer lab to assist students with the financial aid process. Graduating students who have at any point received Federal Direct student loans are required by the U.S. Department of Education to complete EXIT Counseling on studentloans.gov. This requirement should be completed before the Grad Finale on April 22. Holds have been placed on the accounts of those who have failed to complete the requirement preventing students from receiving their diplomas and official transcripts. Encourage your students to complete this requirement as soon as possible. Questions? Contact the Office of Financial Aid at 609-652-4203.