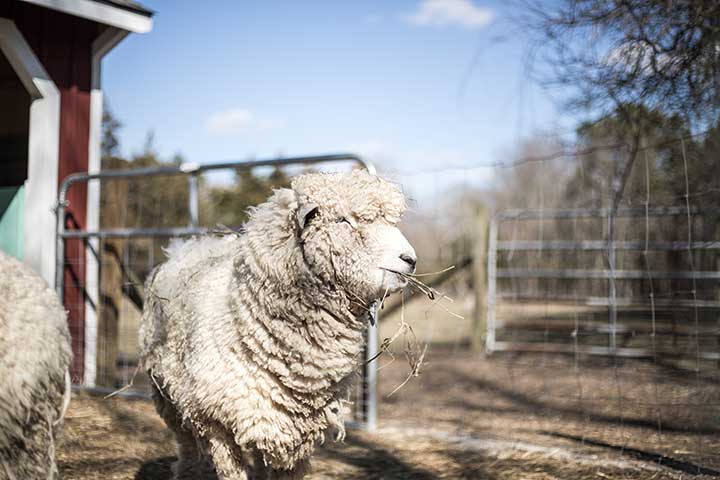 Every year Niki Giberson '78 chooses a theme when naming the lambs on her farm. This year’s names were inspired by the Wizard of Oz.  | Photo by Susan Allen '09, '14

Niki Giberson ’78 walks out of her classroom into her backyard sheep pasture on Swan Bay Farm in Port Republic, New Jersey.

“Little sheeeeep!” she calls to her flock as she opens the gate.

Within seconds, twin lambs Emerald and Ruby race each other to a bench and nuzzle the tote bag holding baby bottles filled with warm milk.

Giberson hand feeds the babies to help their mother who had a complication preventing her from nursing.

The twins were born in front of a captivated audience of 200 at Lamb Celebration Day, an event that Giberson hosts annually to share the joys of farm life with the community.

Since she was a teenager, Giberson has been drawn to animals, and not just the cute, wooly ones.

During high school, she worked part time for an animal behaviorist at Princeton University where she ran experiments with shell-less terrestrial mollusks—better known as slugs. She was tasked with figuring out the best diet for them to thrive so that scientists could study their sophisticated nervous systems. 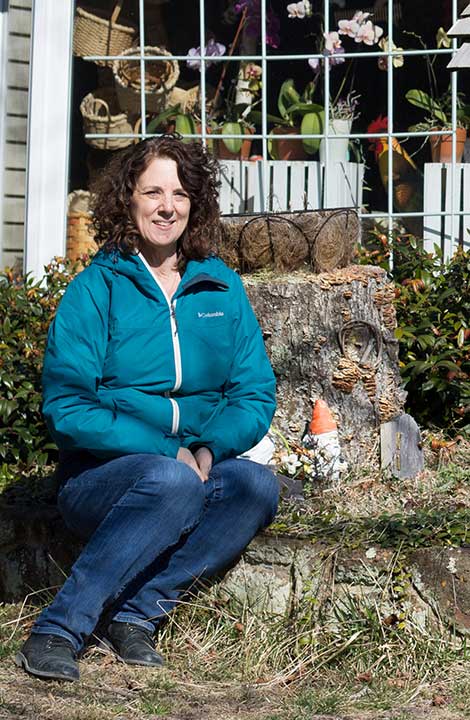 Undeterred by slimy specimens, she was ready to pursue a college degree that would allow her to work with a variety of creatures.

She arrived at Stockton “bound and determined to be an animal behaviorist,” but she realized she needed time to reassess her career goals and left school for a year.

Back at home, she began working at Bon Appetit, a gourmet food store. She excelled and the New York Times wrote a delicious review of a quiche that she prepared at work. “I loved it, but it was not a forever job. I wanted to do something creative,” she said.

She found what she was looking for on a visit to the historic Batsto Village in Hammonton, New Jersey.

She was drawn to the woman working a spinning wheel and weaving loom, gracefully transforming raw wool into wearable fashions.

Fascinated by the process, she asked for lessons.

“Okay. I’ll give you one class, and if I like you, you can come back,” was the answer she received.

She aced the class, and now she was ready to return to Stockton, but this time, she was choosing her own unique journey.

Her Liberal Arts degree was called Early American Crafts and Culture and combined coursework in history, the arts and business—almost a triple major that culminated with an art show and a thesis in history.

In between classes, she worked full time at Smithville Village as a weaver.

When her loom abruptly developed a strange wobble, she called the village’s decoy carver, Mr. Gary, for help. With a cedar wedge, he quickly mended the problem.

She later discovered that her now husband was sabotaging her loom so he’d have a reason to meet her.

“He picked me flowers, bought me chocolate eclairs and lied about his age,” laughed Giberson, adding that life with her husband has “always been an adventure.”

When a house fire took everything from the Giberson family, the town had a shower giving them everything they needed to start over again.

“There’s no way I can repay everyone for their generosity,” she thought. Inspired by a strong need to give back, she built a classroom onto her re-built home.

And then came the sheep.

The threads that weave a lifestyle honoring tradition, the land and learning formed a creative space where Giberson shares her love of crafting, cooking and animals.

“Much more happens in here,” she said, sitting in her classroom where people gather to learn basket weaving, wool felting and traditional crafting. “Women, especially, think through their mouth. What happens here, stays here, and people leave feeling better about life and themselves."

The narrow passage between two long tables is Giberson’s “dance space,” where she twirls back and forth between the sink that soaks reeds and her students who can make any of the 97 basket styles she offers.

“I love it. It energizes me. Sometimes it’s aerobic basket weaving,” she laughed.

Tasty Tuesday classes come with a recipe and handmade treats.

She teaches friendship classes for the Stockton Center on Successful Aging, and for each class she teaches, she donates a dozen chickens to a third-world country through Samaritan’s Purse.

When people leave her classroom with “their own piece of history made by hand,” Giberson knows that “I’ve done my job. That’s why I’m here.”

Every piece comes with a lifetime guarantee, too.

Learn more about Stockton's Bachelor of Arts in Liberal Studies.