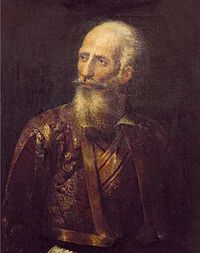 On Saturday, March 21, 2008, the Friends of Hellenic Studies of the Richard Stockton College presented a bi-lingual reading and performance by Yannis Simonides on the 187tth  anniversary of the Greek War of Liberation from the Ottomans. Mr. Simonides narrated the historical background in English and interspersed his recitation with the words of General Ioannis Makriyannis (1797-1864), a legendary military leader who at a young age emerged

as a key general of the Greek Revolutionary army, and afterwards as one of the founders of the Modern Greek State. Makriyannis learned to read and write expressly in order to produce this extraordinary document of the period during and after the Greek War of Independenceagainst the Ottoman Turks. Through his Memoirs, his only work, he has come to be regarded as one of the most important Greek literary figures of the last two centuries.

Yannis Simonides recited in Greek, immediately followed by English translation. These narrations were complemented by recordings of Greek revolutionary songs of the period (kleftika tragoudia) and a slide presentation that illustrated the text. Revolutionary war battles are depicted via slides of paintings by Zografos which weresponsored and directed by Makriyannis himself and are now at the Gennadios Library in Athens.

Mr. Simonides is known world-wide for his role as Socrates in a dramatized version of Plato’s “Apologia” (also performed at Stockton). Born in Constantinople and raised in Athens, he is a Yale Drama School trained actor/writer and Emmy-winning documentary producer. His performance work includes plays by Euripides, Aristophanes, Shakespeare, Brecht, Korres and Pontikas, along with solo and ensemble pieces culled from the writings of C.P. Cavafy, General Makriyannis, Nikolai Gogol and Plato. He has received support from the National Endowment for the Arts, the Greek Ministries of Culture and Foreign Affairs, the A. Onassis, L. Kostopoulos and Levendis Foundations, Time Warner and the Mobil Foundation.

It was a tremendous honor for us to have such an accomplished, skilled and exceedingly generous performer at Stockton. We have been twice captivated by his incredible talent and hope to have him with us again someday.