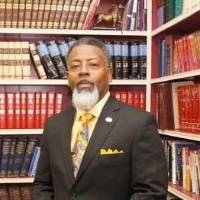 Reverend Collins A. Days, Sr. attended South Carolina State College in 1978 to pursue a Bachelor’s degree in Political Science.  Rev. Days became the youngest full-time Pastor in the State of South Carolina when he accepted the call to Round-O Baptist Church in Darlington, SC.  After thirteen years of serving the congregation and community in Darlington, S.C., Rev. Days and his family relocated to Atlantic City, NJ, in order to serve the congregation of Second Baptist Church. With over 2,000 members, he shepherds one of the largest congregations in Atlantic City.

Rev. Days has initiated, implemented, and promoted numerous community projects. His commitment to missions is evident through the agency of the United Brethren in Action (UBIA), of which he serves as President. UBIA supports mission partnerships in Kenya where clinics, school libraries and a children’s orphanage was established to provide housing and education for more than 200 children.  In addition to Kenya, Rev. Days has also visited the following countries to perform missionary work abroad: Uganda, Tanzania, Malawi, South Africa, Swaziland, Mozambique, Zimbabwe, Botswana, India, Haiti, Trinidad, and the United Kingdom.

Rev. Days, twenty-four years ago, established a Community Development Corporation known as Vision 2000 for which he serves as President.  Vision 2000 has accomplished a great deal in the Atlantic City area, including developing home ownership programs, creating the Civil Rights Garden, building senior citizens apartments, instituting minority-owned businesses and establishing low-income housing. He serves on the Board at the John Brooks Recovery Center, which offers substance abuse treatment services in Atlantic City for New Jersey residents.

Rev. Days possesses a fervent desire to encourage emotionally broken men and women who have lost hope. That desire led him to launch Christians in Recovery, a program for those struggling with addiction. Likewise, it was his deep concern for our youth that motivated Rev. Days to establish the Pastor’s Posse, a mentor program for male teenagers.  Rev. Days is an advocate for education and serves as a mentor to many. He promotes an anti-violence movement in Atlantic City, as well. He has received numerous awards, including the Dr. Martin Luther King Award and the Stockton Council of Black Faculty’s Lifetime Achievement Award.