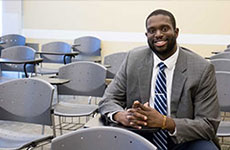 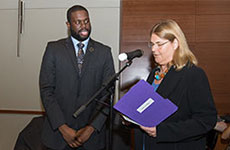 Why did you choose Stockton?

I always reach these points in my life where I feel as though it’s time to begin a new chapter. By the time I was 19 years old, I felt as though I had accomplished everything I set out to do in the environment I was in; I sought out more in life and needed new challenges. I chose Stockton because I was accepted into the Master’s Program and it was the best opportunity for my future. I guess you can say the rest is history!

When I made the sacrifice of transferring schools, I knew that I’d have to start over. When I first came to Stockton, my experience was very far from perfect. I went through a lot and it took me quite a while to adjust to the new environment (while also facing a lot of the same growing pains transfer students go through). Despite the tribulations I faced, I never gave up on myself. I have always been relentless; I worked extremely hard to put myself in a position where I felt as though I could succeed.

As far as the process went, in 2014, my first year here, I won a seat on the Student Senate as an undergraduate transfer student. There were 20 people running for four seats and despite being new, I was elected. All through high school, I ran for student government positions and never won; to my surprise I was elected. It made me feel like I had true purpose and that I could accomplish anything I set my mind to doing here.

Everything else I did on campus I did because I wanted to get involved, meet people, network, help people, but most importantly, leave a lasting legacy. I believe that you must always give your best effort in everything you do and you must also do things that align with your values. Throughout my time at Stockton, I’ve put in so much work to build myself up to who I’ve become, while trying to make a genuine impact on the lives of others. I believe it is important to be genuine in all that you do. I hope my story inspires others to take risks when necessary, believe in yourself no matter what, go after whatever you want in life, and not quit regardless of how hard things get.

In the spring, I graduated with my master’s degree. I am currently working with the Fraud Detection and National Security Directorate within The Department of Homeland Security. I accepted this position in May and started about a week after graduating. I have been in this position for the past 6 months and plan on staying within Department of Homeland Security for a while as I continue to learn and gain experience. I have also considered going back for a Doctoral Degree, but right now my plan is to work and gain experience as mentioned.

I am the first transfer student, first graduate student and second African-American in University history to serve as a student representative on the Board of Trustees. At Stockton, I founded the “I-Phi Food Drive” which is dedicated to collecting canned goods to be donated to the Atlantic City Rescue Mission. I also served as the Regional Graduate Affairs Coordinator for my fraternity.

In my commitment to community engagement, I dedicate my summers to volunteering with the American Legion Jersey Boys State Program; I was a 2011 alumnus. At Stockton, I served two years on the Student Senate, as a member of both the Finance Committee and the Government Affairs Committee. I work within the Office of Admissions as a Student Ambassador, and also served as the Graduate Coordinator for the Office of Event Services and Campus Center Operations.

I was recently featured in the United States Citizenship and Immigration Services national ‘Our Stories’ campaign. In this feature I was interviewed and some of my story was told; I’m proud to say that the article was viewed by Federal employees all across the United States! From what I was told, I became the first employee in my Center’s history to be featured in the USCIS national campaign! In addition to this recognition, my current Center (Potomac Service Center) featured me in their weekly newsletter for my accomplishments thus far. I’ve worked extremely hard to get to this point and I’m glad I have been able to maintain a consistent level of success.